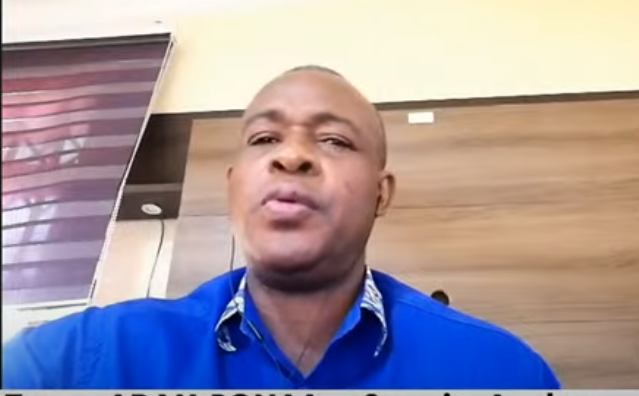 A security analyst, Adam Bonaa has said the recent increase in daylight robberies in the country comes as no surprise to him.

Mr Bonaa, speaking to Evans Mensah on Top Story, Monday, revealed that the robbers have adopted new tactics for these acts.

“This incident that happened has always been waiting to happen. It is the manner in which it took place, you will want to look at the way the Bank of Ghana vis-a-vis the police itself allow themselves to be used in carrying money.

“I mentioned to you that crime patterns have changed. It has moved from night robberies to daylight robberies and so it tells you that the modus operandi of these criminals now involves tracking down their victims. And if you saw the way and manner in which this fallen officer was shot, they were so precise. They saw him and made sure they shoot at him and kill him and get the money, shoot other people and run,” he said.

His comments come after the ghastly murder of police officer, Emmanuel Osei, and an eyewitness, Efua Badu, by armed robbers at Adedenkpo, a suburb of James Town in Accra, on Monday.

Reports reaching JoyNews revealed that the van carrying an unknown amount of cash and these persons, was trailed by the armed men in a taxi and on a motorbike, popularly called, ‘okada’.

When the bullion van got to a less crowded place, the robbers attacked the vehicle by firing indiscriminately at it, killing the police officer on board instantly.

Mr Bonaa noted that the unequipped nature of these trucks that convey money with police escort should be upgraded to make such attacks difficult to carry out.

He, therefore, pinned the untimely death of the police officer and the other victim on the non-armoured nature of the vehicle used.

“If you use literally farm trucks, these pickups are farm tracks, no reinforcement, nothing. These don’t have any bulletproof mechanism. So you can ambush them, kill the officer, rob them and steal their guns.

“Daylight robberies are rampant in other countries so do the police themselves know or the national security, are they aware of these patterns of crime?” he quizzed.

He further added that the failure of the police and the national security to undertake vigorous research on the number of illicit fire arms within the country, is a reason for these daylight robberies.

To the security expert, this initiative should have been carried out before the security strategy document launched by President Akufo-Addo and the sector Minister, Kan Dapaah.

“How many fire arms do you have at the hands of these bandits? We have a national security policy document that was launched and the foreword was written by the President and it has the base-line survey about illicit fire arms and this data was collected in 2014 to seven years late and that is what Kan Dapaah and his people put in this document.

“If they had attempted to do a fact collection data on illicit fire arms, they could have realized and said ‘hang on, we have too many firearms. We’ve got to probably suspend everything we are doing and go into town and retrieve these fire arms’”, he added.

Meanwhile, Mr Adam Bonaa has called for the retirement of the Inspector General of Police (IGP), James Oppong-Boanuh.

His reason being the lack of enthusiasm to introduce innovative measures to curtail the surge in day light robbery cases recently.

“I am putting the blame at the doorsteps of the Police IGP and I am advocating that he should go, he has reached retirement, they have given him two extensions so he should go home for more enthusiastic, energised officers who are within the 60 years limit to take over and probably put a bit more enthusiasm into the Ghana Police.

“When was the last time we saw any serious reshuffle? Police operation reshuffle, commanders being moved left and right, nothing, and rubbers have become a smacked in the face,” he said.

Currently, he has advised the IGP to address the issue with the resources at his disposal rather than engaging in academic discourse.

“I don’t expect the IGP to be talking. I am expecting the IGP to be working. The police is supposed to be the foremost enforcement agency in the country,” he stated.

The country has recently recorded a rise in daylight robberies in the Greater Accra Region.

On Wednesday, June 9, a man was shot in the stomach in a daylight robbery by two armed men at Pigfarm. He was pronounced dead 24 hours after being treated at the 37 Military Hospital.

The same day, two armed men also broke into a forex bureau near Honeysuckle in Osu. They stormed the structure near the Police Station and made away with an undisclosed amount of money.

Some workers sustained injuries and were admitted at the 37 Military Hospital. The culprits in these two incidents are currently at large.

On Friday June 11, an unidentified man in an attempted robbery case, attacked the driver of a Nissan Pathfinder with registration number GE-8088-11 on the GIMPA- Fiesta Royale road.

He threw a big stone at the vehicle, smashing its glass door and tried to escape into a nearby bush. But he was arrested by the Police after the victim drew the Police’s attention.

DISCLAIMER: The Views, Comments, Opinions, Contributions and Statements made by Readers and Contributors on this platform do not necessarily represent the views or policy of Multimedia Group Limited.
Tags:
Adam Bonaa
Daylight robbery
Security Analyst