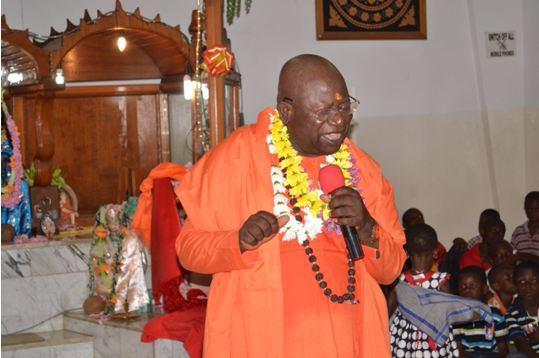 The Head of the Hindu Monastery of Africa, the most revered Ghanaian who became the first Hindu monk in March 1975, has died.

The great leader, His Holiness Swami Ghananand Saraswati died on Monday, January 18. Until his initiation, he was known as Guide Kwesi Essel. He was born from a humble family in Senya Beraku in the Central Region on the September 12, 1937.

"The Hindu Monastery of Africa wishes to announce to the general public the attainment of Mahasamadhi (passing on to eternity) of His Holiness Swami Ghananand Saraswati on 18th January, 2016. [He was] the first African to be initiated into the Holy Order of Hindu Monks", a statement said.

The late Hindu Monk’s final memorial service will take place on Sunday, February 7 at the headquarters of the Hindu Monastery of Africa at Odorkor in Accra.

He was born of humble parentage of Senya Beraku in the Central Region of Ghana on the September 12, 1937. At the early age of six his devoted mother died and this was to have a serious effect on his education. He had his primary school education at Winneba and Senya Beraku respectfully.

He quickly took up serious religious practice and in 1954, at the age of seventeen, he started a prayer group at his hometown, Senya Beraku, praying and meditating with friends.

In the face of great difficulties and hardships, he persevered and worshipped zealously, sometimes fasting for long periods. His major preoccupation was praying to God to give him the opportunity to serve more and more people.

In 1962 he moved to Accra and on November 24, formed the Divine Mystic Path Society. He then started correspondence courses on the Hindu way of life (Sanatana Dharma) with the Divine Life Society of Rishikesh, Himalayas, in India.

As a result of his urge to search for God and with the assistance and support of some well-meaning elders of the society to whom he had greatly endeared himself, he left in August, 1970 for the Himalayas, India where he sat at the feet of masters at Sivananda Ashram.

He returned after almost two years of study, passing through Germany, Denmark, the U.K. and the USA. He initially founded a branch of the Divine Life Society at Odorkor, Accra, the present headquarters of the Hindu Monastery of Africa. It provided spiritual leadership to a number of devotees, instructing them in the higher esoteric teachings of the masters.

It was his dedication to the propagation and practice of these teachings that culminated in his initiation into the Holy Order of the Renunciates of India, and the founding of the Hindu Monastery of Africa by his master, His Holiness Swami Krishnanand Saraswati who had come all the way from the Far East.

His initiation was unique in that, it was done by that Revered Saint of India, H.H. Swami Krishnanand Saraswati who had not met him physically until his arrival in Ghana for the second time and stayed only for two weeks.

Originally, the Swami was scheduled to stay in Ghana for three days only, but so strong and irresistible was the spiritual bond that had developed between them when they first met that they behaved and talked as if they had known each other for many years.

It is significant to note that the visit of Swami Krishnanand to Ghana was arranged and organised by a group, which was completely independent of the Divine Life Society, and without prior knowledge of Swami Ghananand himself. Herein lies the truth in the old adage that ‘when the student is ready the master appears.’

His Holiness .Swami Ghananand Saraswati has been the head of the Hindu Monastery of Africa, Accra, Ghana since it was founded by H.H. Swami Krishnanand Saraswati in March 1975.

Under Swami Ghananand’s leadership the Monastery has established branches in five cities in Ghana (Cape Coast, Tema, Kumasi, Ashanti-Mampong) with another in Lome-Togo. More than 2,500 families from Ghana and Togo have embraced Hinduism, not to mention those who practice the principles of Hinduism privately.

The late Hindu Monk has to his credit the authorship of fourteen (14) books on Hinduism in the following titles:

The Hindu Monastery supports orphanages, schools for the handicapped and destitute, and also undertakes various social services in the form of monthly free medical services and occasional eye screening camps for the poor and needy as part of her social responsibility. The monastery also lays stress on inter-faith harmony.