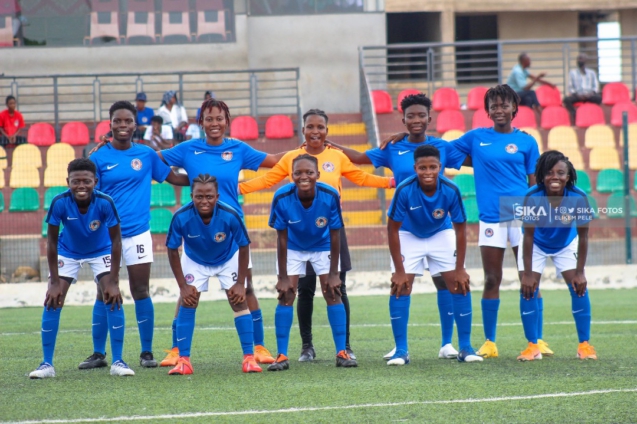 Bankroller of Ridge City Women’s Football Club, Cleopatra Nketiah, has revealed her team’s performances in the Women’s Division One League have put fear into their opponents anytime they play.

Ridge City has been in the news in recent times after playing just 27 minutes in their last two league games, where clubs have had to quit the game abruptly due to ‘injuries’.

Ridge’s game against Starlet Ladies ended in the 17th minute after the club had scored four goals while their encounter with Nimobi Ladies last weekend was cut short after they had taken a three-goal after just 10 minutes played.

Speaking to JoySports on why her Ridge City have had to face such issues in their games, Nketiah insisted her side is perhaps too good for the other clubs hence they fear conceding more goals at the end of 90 minutes.

“On the topic of people just dropping off and getting injured, I think it comes with the Ridge City name,” she said.

“People see us and they hear about us and just don’t want to continue the game. It happened to us last season – about twice and it has happened to us this season again. It’s not a shock because we are currently top of the table, we’ve played seven games, we’ve won all and we’ve scored about 38 goals and we’ve only conceded six.

“So I’m not surprised if teams don’t want to play against us. But it mainly goes beyond the fact that people are afraid of us and extends to the fact that we don’t have enough players who are serious in the women’s league,” she added.

According to Nketiah, the case where games have had to come to an abrupt end has already happened five times already this season.

The first round of the Division One League ended last weekend and Ridge City occupy the top spot in Zone A, boasting 21 points from seven games played.