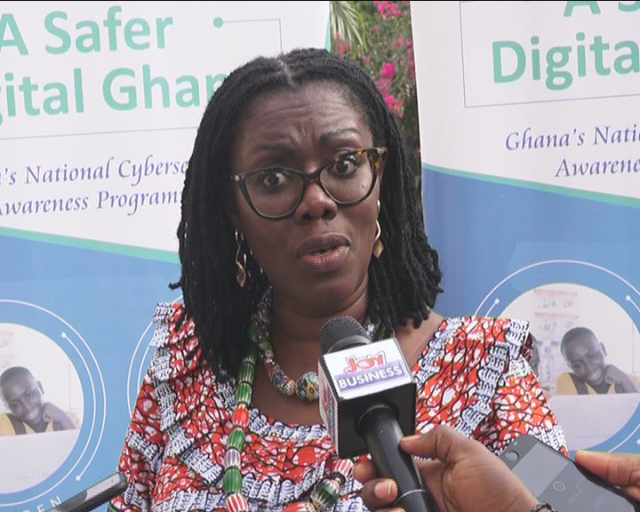 The Minister was speaking to journalists about the performance of the CMP since its inception in the first quarter of 2017.

The Common Platform was established under the CST (Amendment) Act, Act 864 for the purposes of real-time telecom traffic monitoring, revenue assurance, fraud management, and mobile money monitoring in the telecoms sector.

According to the Minister, prior to the inception of CMP, telcos declared their revenues and paid taxes in bulk to the Ghana Revenue Authority (GRA), so GRA could not disaggregate the various commercial activities of the telcos from each other and know exactly what to expect from each.

“But since the common platform was established, GRA is now able to monitor the billing nodes of the telcos in real-time and know exactly how much money they are making from each activity so the telcos are forced to do proper revenue declaration and that is reflecting in the huge savings so far,” she argued.

The Minister said the CMP now provides separate information on revenue to government from measurement of top-ups per operator, and actual consumption of airtime per operator, which enables GRA to verify the revenue stream of the telcos and predict tax revenue from the sector for proper planning and policy formulation.

She pointed out that the implementation of CMP has therefore resulted in a whopping GHâ‚µ470million savings in VAT, CST, NHIL and GETFund Levy, money since 2017, which would have been lost to the state if not for the CMP.

Ursula Owusu Ekuful argued that the significant saving being experienced now, could only be attributed to the implementation of the common platform because that is the only new thing introduced into the system from 2017.

Meanwhile, Adom News is reliably informed that the GRA is currently engaging each of the telcos to answer for their share of the GHâ‚µ300million taxes hidden from the state between 2015 and first quarter of 2017.

The Minister said, besides stemming the tax revenue leakage, the common platform has also helped government to curb SIMbox fraud and that has allowed savings of over US$205.6 million, which would have been lost to the state and to telcos if not for the platform.

Ursula Owusu said the platform has a feature called TeleCop, which monitors SIMBox fraud by generating over 150,000 calls from abroad into Ghana daily, in order to trace and deactivate fraudulent SIMs used in terminating those calls.

“The state-of-the-art TeleCop system is expected to deliver tax savings of approximately GHâ‚µ795.9 million from in-bound international calls over the five-year contract period,” she said.

The Minister also noted that the CMP has resulted in less cost of monitoring the telcos and higher value for the state, explaining that it has helped government to save over US$1.1million over two previous contracts meant for the same purpose.

According to her, Subah Infosolutions and Afriwave Telecoms Limited held two separate contracts to do two of the four jobs the CMP does, and they were paid a cumulative amount US$2.5 million-plus every month, but the operator of the CMP, Kelni GVG is being paid US$1.4 million a month for four jobs.

“Over the period of the five-year contract it will, therefore, result in the savings of US$66 million to the state,” she said.

The CMP, according to the Minister, monitors not less than 2.5 billion transactions within the telecom sector in a day and collects relevant information from all these transacts in real-time for the purposes of state revenue assurance.

Ursula Owusu Ekuful was quick to point out that the CMP does not monitor communication content, which borders on the privacy of individual, but the technology used in transmitting that content to safeguard state tax revenue.

On mobile money monitoring, the Minister noted that since the beginning of this year, when that function came on stream, it has recorded GHâ‚µ29.1 billion average monthly floatations from 195.8 billion mobile money transactions.

She said the telcos are making a quantum of GHâ‚µ71million as transaction fees per month from those GHâ‚µ195.8 billion mobile money transactions, and she believes they need to pay a separate tax on that.

According to her, she and the Finance Minister are at variance on whether the telcos should pay a separate tax on their mobile money transaction fees, but she believes that GRA needs to have a conversation with the telcos about that.

Meanwhile, some critics like CDD-Ghana have said that imposing another tax on mobile money transaction fee, in addition to what telcos already pay as corporate taxes on all their revenue streams, would only lead to those taxes being passed on to the consumer who is already burdened with a 50% increase in CST.

They are therefore advising the Communications Ministry to shelve the proposed tax on mobile money transaction fees.

DISCLAIMER: The Views, Comments, Opinions, Contributions and Statements made by Readers and Contributors on this platform do not necessarily represent the views or policy of Multimedia Group Limited.
Tags:
Kelni GVG
Telcos
Ursula Owusu-Ekuful