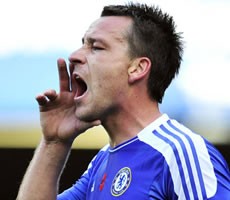 Chelsea FC captain John Terry said he is "delighted" to have signed a one-year extension to his expiring contract, terms that will keep him at Stamford Bridge for a 17th season.

The centre-back's previous deal was due to expire next month, but his new terms mean he will extend into a 17th season a Blues career that began when graduated from the youth setup to make his senior debut in October 1998.

Terry, who joined the Stamford Bridge outfit when he was 14, has since made 621 appearances for the west Londoners and is fourth on their all-time appearances list.

Described by Chelsea as the "most successful captain in the club's history", the 33-year-old has won three league titles, five FA Cups, two League Cups, the 2011/12 UEFA Champions League and, last season, the UEFA Europa League. He has scored 57 goals in that time.

Speaking to the Chelsea website, the former England international said: "I'm delighted to have signed an extension to my contract with Chelsea, taking me into my 20th year with the club. I'd like to thank the fans and club for their continued support, and the manager, who was instrumental for me last season."