The Black Stars 10: A series ranking Ghana’s greatest players in the 21st century 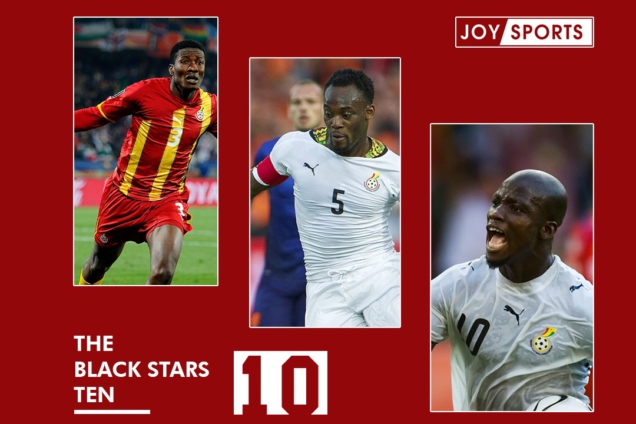 Before the 2000s, of course the Black Stars existed. In fact, those were the glory days of Ghana’s senior national team. The Black Stars were regarded as powerhouses in African football and were deeply revered by other African countries.

1992 was the last final Ghana made in the AFCON before the turn of the century. The disappointment of losing on penalties against Ivory Coast hurt a nation, but what left a scar was the fact that Ghana hadn’t qualified for a World Cup.

Dominant on the continent, blessed with a golden generation of stars such as Mohammed Gargo, Kwesi Appiah, Anthony Baffoe, Odartey Lamptey, Abedi Ayew and Tony Yeboah, but no taste of the most coveted event in world football.

An occurrence which left a bitter taste in the mouths of numerous Ghanaians. Then came the 21st century which represented a clear demarcation, though, between the old Black Stars and the new.

We saw a switch in fortunes as qualification for the World Cup became a birthright and failure to win the AFCON became somewhat ‘acceptable’. In the last 20 years, Ghana have qualified for three out of a possible five World Cups (2006, 2010 and 2014) and lost two AFCON finals (2010 and 2015).

Today, as the Black Stars get ready to continue their qualification for the 2022 AFCON against Sudan, Joy Sports launches “The Black Stars 10”, a 10-part series intended to give the reader an idea of the greatest players to illuminate the Ghana national team in the past 20 years.

Why 10 and not 20? Because 20 would widen the basket. The bracket of the greatest players has to be limited, anything beyond 10 could see the inclusion of players who were very good but not great.

Also, 10 has a nice feel to it with most listicles usually capping at 10. A downside to limiting the list to 10 is seeing a considerable number of popular players omitted from the list.

To help reduce the suspense, there is no Thomas Partey, Jordan Ayew, Mubarak Wakaso or Kevin Prince Boateng on the list. More surprisingly, there is also no room for Laryea Kingston, Kwadwo Asamoah, Junior Agogo or Jonathan Mensah.

The discussion of recency bias always resurfaces whenever there is a comparison between two different generations. Our last bit of a spoiler is the fact that out of the 10 players selected, seven of them have officially retired from the national team, with the other three still active.

Also worth to note that eight of the 10 players were in the squad for the 2006 World Cup which was Ghana’s ever first appearance at the competition. Truth is, retired players give room for assessment of the impact of their full careers as opposed to active players. That’s the reason why our list enjoys the breeze of nostalgia provided by many of these legends.

The big question is how do we measure greatness? How do we compare players from different generations under different coaches? How do you compare the impact contrasting players such as Richard Kingson and a prolific goal scorer such as Asamoah Gyan?

No matter how objective we seek to be, the list will not be universally accepted as any algorithm used will have its flaws. The rankings will leave a lot of readers scratching their heads in dubiety.

Just to be clear, we are not embarking on this project to spark controversy online. The aim of “The Black Stars 10” is to pay tribute and celebrate our legends in the past two decades. So over the next 10 days, we will be outdooring stories to celebrate each of these 10 remarkable heroes.

We will create a thread of all the 10 articles here as well providing the links below when they are published. You can bookmark this page and check back here every day or you can follow our handles @JoySportsGH on social media for updates.

Find below a thread of ‘The Black Stars 10’ articles:

DISCLAIMER: The Views, Comments, Opinions, Contributions and Statements made by Readers and Contributors on this platform do not necessarily represent the views or policy of Multimedia Group Limited.
Tags:
Black Stars
Black Stars squad