There is no dignity in joblessness – Mahama 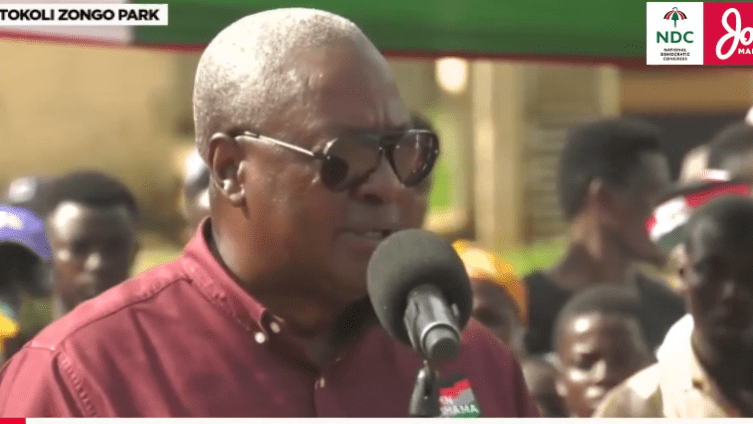 Former President and Flagbearer of the National Democratic Congress, John Dramani Mahama has reiterated his plan of providing sustainable jobs for the youths through small-scale mining.

Addressing a durbar of small-scale miners at Wassa Japa in the Wassa Amenfi East District of the Western Region, he stressed that the state of joblessness among small-scale miners is as a result of the New Patriotic Party’s decision to assign a few party members to undertake mining activities.

“Respect and honour evades a man who stays at home not because he is lazy, but because there are no jobs, all the time, you have to look forward to family and friends to cater for your needs, there is no dignity in that,” he said.

He stated that collapsing galamsey by assigning a few people to mining sites, President Akufo-Addo had stripped people of their livelihood.

“A well planned and implemented small scale mining practice is capable of creating jobs for all the youths. The bad governance of the NPP has brought about hunger because they have canvased all practices of galamsey and given it to a few persons in the party with a greater number of the mining population sidelined,” he said.

An NDC-led government, he said, would encourage prospective small-scale miners to form identifiable groups in order to streamline and boost their operations.

This is to regularise properly small-scale mining activities that conform strictly to environmental and safety laws, he added.

He promised to establish a Gold Board, should the National Democratic Congress be given the nod in the upcoming December elections.

The board, according to the flagbearer of the NDC, will take charge of the sale of gold in the country as well as ensuring the best practices relating to small scale mining are enforced.