There is system failure of regional blocs and multilateral institutions – Prof. Aning 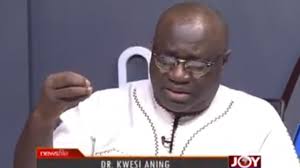 The Director of the Faculty of Academic Affairs and Research at the Kofi Annan International Peacekeeping Training Centre (KAIPTC), Prof. Kwesi Aning has attributed recent coups in the West African Region to failure by the regional bloc to enforce its rules and regulations.

Speaking on Newsfile on Saturday, Prof Aning said ECOWAS and other West African multilateral institutions have consistently been negligent to apply its rules to member states.

This, he said accounts for the setbacks experienced in the Region.

“There is system failure of our multilateral institutions. First to apply the rules that we have voluntarily signed onto,” he said.

The Security Analyst predicted a couple of coup d’etats in the West African Region if the regional bloc, ECOWAS and the African Union (AU) do not urgently resolve the insecurity threats in the region.

“This would not be the end of it. Between now and June 2023, we would see similar things happen. Probably two more. If we don’t stem the tides between now and 2023, then we get two more, the pack of cards will begin to fall,” he said.

There was a Military coup in Burkina Faso on Monday, January 24 due to the deepening anger about President Roch Marc Christian Kabore’s response to violence by armed groups.

The 64-year-old was elected in 2015 following a popular revolt that forced out former President Blaise Compaore.

He was re-elected in 2020. But since last year, he has faced a wave of discontent about armed groups’ attacks that have claimed the lives of about two thousand people and forced a million and a half to flee their homes.

DISCLAIMER: The Views, Comments, Opinions, Contributions and Statements made by Readers and Contributors on this platform do not necessarily represent the views or policy of Multimedia Group Limited.
Tags:
coup d'état
ECOWAS
Prof. Aning