This is the world’s most googled sex question 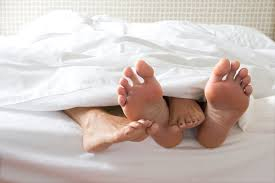 The Internet has its downsides, sure, but it also comes in handy when you need some quick answers.

Recently, Google revealed its most commonly searched sex-related question: “Where is the G-spot?” You want to make sure you’re doing things right without actually letting on that you have no idea what’s going on down there, right? (But don’t beat yourself up about it. There’s a good chance she’s still searching for her G-spot, too.)

The question's important and you want answers, so we’re laying everything out for you right here, right now, so you can be confident the next time things get hot and heavy.

Google will tell you the G-spot is about 50 to 80 millimeters (2 to 3 inches) inside the vagina, on the front wall. And it goes on to say that for some women, stimulating this area creates a more intense orgasm than clitoral stimulation.

But, unfortunately, things aren’t as clear cut as the search engine’s answer leads you to believe.

The Daily Mail reported that a British study of 1,800 women claims there’s no evidence for the existence of the G-spot. But French gynecologist Sylvain Mimoun quickly disputed the findings, saying that not only were they offensive to women due to genetics being the sole focus, but that 60 percent have a G-spot and it just needs to be discovered.

But it may not be one specific spot that’s the magic button for a woman’s pleasure.

According to a study we reported on last year, it’s actually a larger erogenous zone that encompasses several different organs, including the front of the vaginal wall (the side toward the belly), the urethra, the paraurethral glands, and the inner “roots” of the clitoris.

Rear entry and woman-on-top are two of the best positions to help you reach the area, though it varies for each woman, says study author Emmanuele Jannini, M.D.

You can also use your hands by Inserting one or two fingers (palm up) and making a “come here” motion. And vibrators designed to hit the G-spot (like this one from the Men’s Health store) could also work for some women.

But the G-spot may not be the be-all end-all. There are four other places that have the potential to excite her: the A-spot, the O-spot, her cervix, and her pelvic muscles. (And here's how to find and stimulate them.) Many women need clitoral stimulation as well, so make sure to engage all of her pleasure centers.