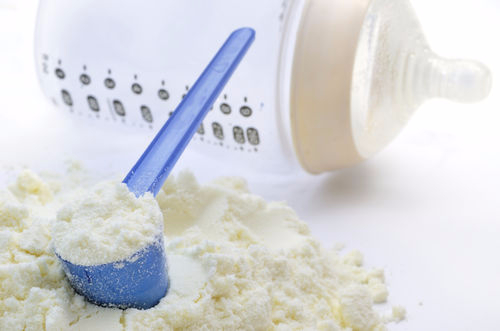 Add this to the reasons that Egyptian women might require a breast examination: to get government-subsidized formula milk for their babies.

That’s what a spokesman for Egypt’s Health Ministry recently told a Kuwaiti newspaper. The news took social media by storm. And the regulation, of course, was deemed "degrading" by many people.

It was the latest sign of the country's economic woes, with rising prices, especially of government-subsidized goods and services, and shortages of food products in recent months breeding frustration and anger among ordinary Egyptians.

Women wanting to buy subsidized baby formula have 2 stand in line for hours and be subjected to breast exams!!#egypt

Earlier this month, dozens of mothers rallied against the shortage of subsidized infant formula in front of the offices of the Egyptian Pharmaceutical Trading Co., cordoned off by security forces. The women spoke of their fears for the lives of their children and the burdens borne by lower-class families in the country.

One tearful mother, who was carrying her child, expressed her outrage to a female police officer. It was captured on a video that went viral and sparked outrage on social media.

"We are not demanding any food items for ourselves,” the woman screamed at the officer. “We are merely asking for milk for our children. How can we afford this?"

The officer did not respond and instead left the scene.

When you think, you've seen it all…#Egypt #women :From breast exams for mothers, to virginity tests for protestershttps://t.co/Ognop7LK0X

The government has increased the prices of the subsidized infant formula by 40 percent. It is still roughly a third of the price of formula sold at pharmacies. But what has added to the frustration among the poor and the lower middle classes is that there are still shortages of the formula.

The scarcity — and the protests — led the military to announce that it will coordinate with the Health Ministry to import the formula in an effort to ease the shortages. The more expensive variety also would be subsidized, selling for roughly half the retail price.

#Egypt .. Military monopolize baby milk market for themselves then make breast exams mandatory before you you can buy ..

That announcement led many critics to accuse the army, which owns or partly owns dozens of companies, of "using the crisis to expand its business." Brig. Gen. Mohamed Samir, a military spokesman, dismissed the accusation in a Facebook statement. The army, he said, stepped in "out of its duty to counter the greed of pharmaceutical companies which import the formula and monopolize the market to increase prices."

On Monday, the army said the first shipment of baby formula purchased from France has arrived and will be available at pharmacies and government-run distribution centers across the country.

This is where the breast examinations enter the picture.

Before, only mothers in extremely poor health or who had given birth to triplets were eligible for the subsidized formula. Now, mothers unable to produce enough natural breast milk, or suffering from chronic illnesses, such as diabetes or high blood pressure, or taking prescription medication that lessens the quality of breast milk are eligible.

The Health Ministry spokesman said the examinations are a way to assist only those families that truly need subsidized baby formula.

But even when baby formula is involved, politics enters the fray in Egypt. The spokesman accused Muslim Brotherhood supporters of ousted Islamist president Mohamed Morsi of claiming on social media that the breast examinations would be held in public. That was not true, the spokesman said. The examinations will take place inside private health clinics.