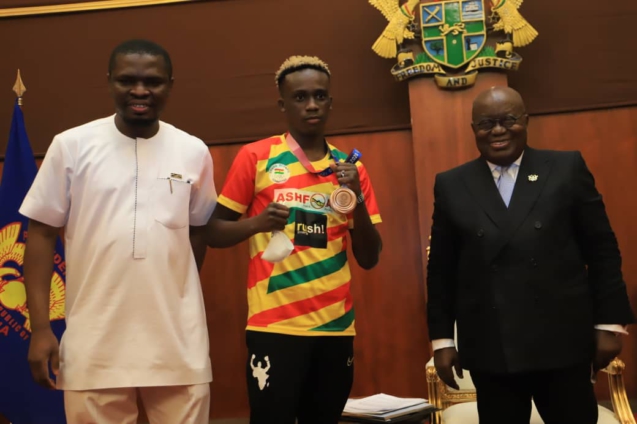 The seven-day wait to meet the President of Ghana brought a positive boost for Samuel Takyi, Ghana’s only medalist from the Tokyo Olympics.

The boxer will receive a total reward of $30,000 and a car for bringing Ghana glory that has eluded for decades.

This was announced by President Akufo-Addo when team Ghana called on him at the Flag Staff House earlier today.

There was also an assurance by the President to continue efforts to supply sports development in schools and provide the requisite infrastructure especially as Ghana is readying to host the Africa Games 2023 edition.

Takyi expressed gratitude to the President and promised he would bring Ghana greater glory.

“Following his exploits Takyi is now ranked fourth in the world and first in Africa in the featherweight division,” Youth and Sports Minister Mustapha Ussif noted.

Takyi expressed gratitude to the President and promised he would bring Ghana greater glory.

The minister during his brief address also noted that all qualification bonuses and allowances due team Ghana have been settled.

Samuel Takyi won a bronze medal after advancing to the last four of the featherweight competition in boxing. Boxing rules at the Olympics indicate that all semi finalists whether they win or lose will be guaranteed medals.