Done in one! – Takyi’s demolition of Nigeria’s Moses 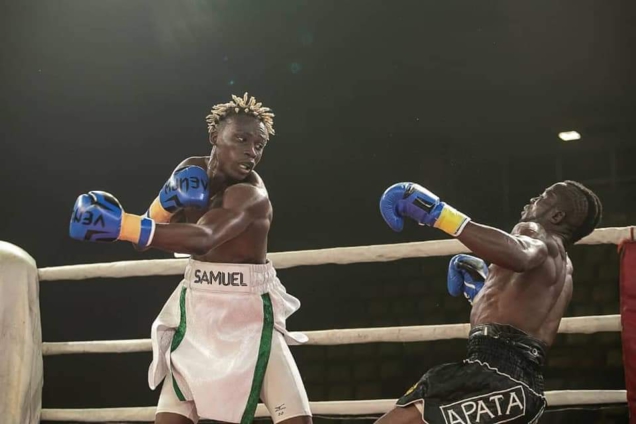 Ghana’s sole Tokyo 2020 medalist, Samuel Takyi, continues his walk in the professional ranks with a major statement in Nigeria yesterday – a first-round stoppage of Samuel Moses in Lagos.

Takyi under the guidance of the legendary Ike Bazooka Quartey in his corner went in all guns blazing from the starting bell. The very confident Ghanaian stepped forward and struck with both hands on the Nigerian who suffered an early visit to the canvas. This twist was a deviation from the expected typical stiff competition that normally characterizes Ghana-Nigeria sporting rivalries.

He managed to beat the count but upon resumption, Takyi stepped forward and with audible instructions from his corner he switched to Moses’ head. For a split moment, both boxers exchanged but Takyi sustained his pace and had an eventual effect.

A combination of headshots and a hook to the Nigerian boxer’s rib area sent him crashing onto the canvas again. This time the referee waved the bout to a close despite a brief protest from a partly dazed Moses.

Takyi by this win has secured his third professional win and first in the lightweight division. As a super featherweight, Takyi knocked out Kamaldeen Boyefio in the second round in a contest staged at the Trust Sports Emporium.

He followed up with a TKO win in South Africa against Madlenkosi Sibuso in June.

At this pace, Takyi is expected to fight at least twice before the year ends.