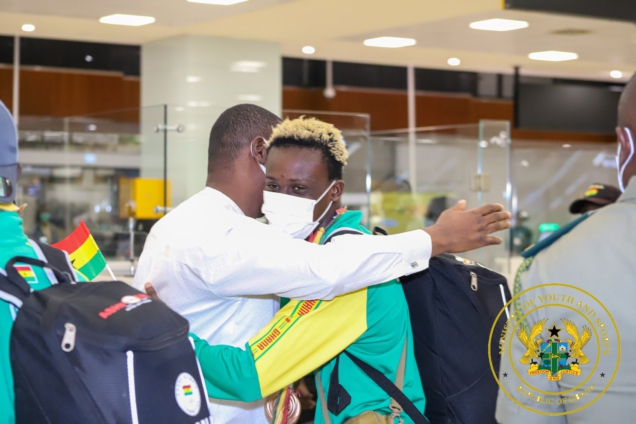 Ghana’s only medalist from the Tokyo 2020 Olympic Games, Samuel Takyi received a hero’s welcome when he touched down at the Kotoka International Airport.

The 20-year-old boxer won bronze from the
featherweight competition in the boxing event of the games ending a 29-year wait for a medal at the multi-sport event.

Thousands of people consisting of a delegation of the Minister for Youth and Sports Mustapha Ussif and the President of the Ghana Olympic Committee Ben Nunoo Mensah, Director General of the National Sports Authority Prof Peter Twumasi, his deputy, Bawa Majeed, and the Deputy Minister of Transport, Mr Hassan Tampuli were present to welcome Takyi, whose exploits catapulted him to become Ghana’s poster boy during the games.

A carnival atmosphere was also created by the deafening cheers and songs from hundreds of members of the Die Hard Supporters Union and
Ghana Boxing Supporters union and youth from Jamestown Bukom and its surrounding areas.

“I am glad to be back home. I am grateful to all for the massive support given to me while I was away. I am grateful to all the fans who came out to give me this welcome,” Takyi told the media while surrounded by his contingent, which included his fellow boxers, coach,
and the technical bench.

He also assured his supporters more medals in the upcoming future competitions.

Takyi, who lost to American boxer Duke Ragan in the semifinals by a 4-1 decision, is the first Ghanaian boxer in 49 years to secure a podium finish since light middleweight Prince Amartey brought home bronze during the 1972 Olympic games held in Munich.

Ghana has now won five medals in its Olympics history, four of which have come from boxing.