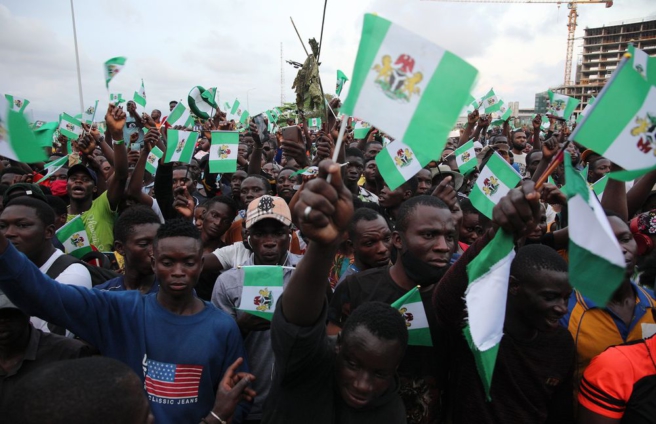 People protest against the excesses of the police’s Special Anti-Robbery Squad, or SARS, in Lagos on Oct. 20. Photographer: Adetona Omokanye/Getty Images

Gatefield Nigeria Ltd., a public affairs company, filed a case against Access Bank in a federal court in Abuja, the capital, on Oct. 28, accusing the bank of “unilaterally restricting” its account and demanding damages of 100 million naira ($262,000), according to court documents. The account was used to raise funds to support independent Nigerian journalists that covered nationwide demonstrations that lasted almost three weeks, according to the firm.

“As more people contributed to our efforts, we noticed that we could no longer conduct transactions on the dedicated account we used for this particular activity,” Adewunmi Emoruwa, the lead strategist for Abuja-based Gatefield, said Tuesday by phone.

The lawsuit will test whether blocking Gatefield’s account without a court order was unlawful. There were other allegations by individuals and organizations on social media that their accounts were restricted during the protests for apparently similar reasons.

Gatefield was told by Access Bank that it was directed by the Central Bank of Nigeria to put restrictions on the account, implemented on Oct. 15, Emoruwa said. A spokesman for Access Bank said the lender doesn’t comment on its customers to third parties. A spokesman for the central bank didn’t respond to emails and calls seeking comment.

More than 70 people, including at least 22 policeman and soldiers, died as the initially peaceful protests against the excesses of the police’s Special Anti-Robbery Squad, or SARS, degenerated into days of rioting and looting across most of the country of more than 200 million people.

Security forces killed at least 10 people when they opened fire on peaceful protesters gathered in Lagos on Oct. 20, according to human rights group Amnesty International. The Nigerian army has denied the allegation.

Thousands took to the streets from Oct. 5 in response to a video that circulated on social media purportedly showing SARS officers killing a civilian.

DISCLAIMER: The Views, Comments, Opinions, Contributions and Statements made by Readers and Contributors on this platform do not necessarily represent the views or policy of Multimedia Group Limited.
Tags:
Access Bank
End Sars protests
EndSARS