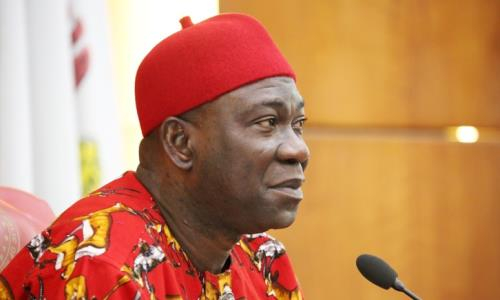 A sitting Senator and former deputy Senate president of Nigeria was over the weekend assaulted in Germany by pro-Biafra activists.

Ike Ekweremadu of the main opposition party was in Nurnberg for an annual cultural festival when the said Independent People of Biafra, IPOB, activists physically attacked him. He was billed to deliver a keynote address.

The Senator represents the people of Enugu and has been deputy Senate president for 12 years till earlier this year. He confirmed the attack on his Facebook page stating that his stay in Germany till the incident had been cordial.

“I was given a resounding welcome by Ndigbo in Germany and everything went smoothly until some men, who identified themselves as IPOB members stormed the venue and began to complain about the killings in the South East, stressing that there would be no Igbo event at the venue.

“I tried to engage them, but when they became unruly, I had to leave the venue. The organisers also invited the police and I was accompanied out of the venue,” his statement read in part.

Videos of the incident on social media showed how despite running to seek shelter in the hall where the event was slated, he was pursued and pulled back and hit by the irate IPOBactivists.

The said event, the second annual cultural festival and convention of the Ndi-Igbo took place with the Nigerian Ambassador to Germany, Yusuf Tuggar, in attendance.

IPOB currently led by “fugitive” Nnamdi Kanu is pushing for the declaration of an independent republic of Biafra, years after a civil war aiming for same led to the loss of millions of lives.

Government got a court order proscribing the group after clashes between security forces and activists. Kanu is reported to have given his blessings to the attack on Ekweremadu cautioning other politicians and governors in the southeast.