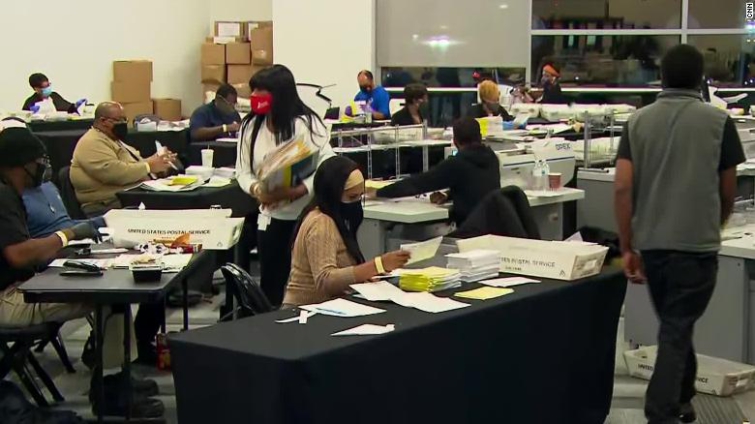 President Donald Trump staged a corrosive and potentially dangerous attempt at undermining the US election on Thursday, baselessly claiming the presidency was being stolen from underneath him as vote counts showed his path to victory disappearing.

Standing at the White House podium, the President repeated false claims that a count of legally cast ballots would show him winning against former Vice President Joe Biden.

He complained that in certain states where he had been leading on election night, tallies have been “whittled down” or have shown his rival leading.

Using the briefing room to espouse baseless claims he is being deprived a second term by fraud, Trump thrust into question the democratic notion of a peaceful transition of power should Biden win.

Instead he suggested he would fight in the courts until the election is decided in his favor.

The spectacle, though foreshadowed by the President for months, was nevertheless a sign of Trump’s unwillingness to cede the White House without a prolonged battle.

Even as he complained that his own race had been rigged, Trump used the occasion to trumpet down-ballot wins by Republicans without explaining why those races wouldn’t be similarly afflicted by his claims of fraud.

His message came as new tallies show his lead dwindling in Georgia and Pennsylvania, where mail-in ballots are still being counted.

Trump spent the past six months decrying the use of mail-in ballots, a strategy even some Republicans feared would suppress his own totals. While Trump retains a pathway to 270 electoral votes, it has grown smaller by the hour.

The President had not been seen in public since his middle-of-the-night speech on Wednesday, when he falsely declared victory.

Aides said Biden’s public appearances on Wednesday and Thursday — during which he called for patience and calm as the votes are counted — prompted Trump to push harder to do the same, though some had hoped to avoid the type of speech the President ultimately delivered.

Despite campaign assurances that the numbers will eventually break their way — and despite the President’s apparent desire for a battle — reality was setting in for several of Trump’s aides in the White House and campaign.

Senior advisers privately acknowledged the math simply wasn’t on their side and were preparing for a loss.

Others privately acknowledged the chances of Trump winning are now slim and were contemplating their next career steps.

But that reality hasn’t appeared to have set in for the candidate himself. Before his briefing room appearance, Trump continued to make a series of phone calls overnight, stung that his lead in some states had vanished and convinced Biden is stealing the presidency.

Entrenched at the White House with no public events on his schedule, Trump has personally dispatched advisers to battlegrounds across the country hoping to wage legal fights in places where the margins remain tight.

That has included his two adult sons, who voiced frustration on Thursday that more Republicans weren’t publicly backing the President in his battle to halt vote counting.

“Where is the GOP?! Our voters will never forget…” wrote Eric Trump. His older brother, Donald Trump Jr., accused “2024 GOP hopefuls” of remaining silent in the effort.

After Trump’s appearance at the White House, it was unclear whether Republicans would remain at his side.

“There is no defense for the President’s comments tonight undermining our Democratic process,” tweeted Maryland’s Republican Gov. Larry Hogan, who has sometimes been critical of Trump.

“America is counting the votes, and we must respect the results as we always have before.

No election or person is more important than our Democracy.”But others remained steadfast, including Vice President Mike Pence, who had not been heard from since Trump falsely claimed victory on election night.”I Stand With President @realDonaldTrump,” Pence tweeted.

“We must count every LEGAL vote.

“Despite his own private skepticism about the efficacy of his legal strategy, Trump has remained intent on waging a prolonged fight, viewing it as his only option. It was an onslaught the President previewed ahead of time, vowing to unleash his team of lawyers in states where he was losing.

But it was nonetheless a scattershot effort that seemed designed more to undermine confidence in the election results and provide legal backing to Trump’s unfounded claims of fraud than to actually surface more votes.

In a morning tweet, Trump laid bare his intentions, even as his advisers insisted they weren’t attempting to suppress the vote.

ET, at which time vote totals in key states actually showed him behind Biden, meaning a halt in counting would render him a one-term president.Trump’s all-caps tweets from the White House residence were bolstered by his campaign’s public relations attempts and by his surrogates, who have voiced baseless claims that the election was rife with fraud.

There has been no credible evidence of widespread voter fraud in this year’s contest.

But Trump’s rallying cry did prompt some of his loyal supporters to congregate at tabulation centers to demand the counting be halted.In public, Trump’s team remains insistent his path to victory is possible and even likely.

Meanwhile Trump has pushed aides to pursue more lawsuits, legal standing be damned, and has personally instructed his adult children to go out and defend him by casting doubt on the validity of the vote counts, multiple people familiar with the matter said.

The President had also been eager to speak publicly. While aides considered having him make an address on Wednesday, it was ultimately decided against because there wasn’t a clear message for him to offer.

Some advisers had also been working to plan events for the President to show him going about his job, but so far none have materialized.

By contrast, Biden made brief public remarks on the last two days, and on Thursday attended a briefing on the coronavirus alongside his running mate, Sen. Kamala Harris.

For Trump, Wednesday was a frustrating stretch. Two key battlegrounds, Michigan and Wisconsin, were called in Biden’s favor.

The race tightened dramatically in Georgia and Pennsylvania, while in Arizona the President is narrowing his margin against Biden.

While Biden spoke to cameras from near his home in Delaware, encouraging patience while still voicing optimism, Trump remained out of sight.

Instead, he spent the day angrily phoning Republican governors to demand updates and question why more wasn’t being done to assist his efforts, people familiar with the calls said.

Trump spoke Wednesday to the governors of Georgia, Arizona and Florida.

At the same time, he has sounded resigned at moments in conversations with some of his allies, questioning whether his legal strategy would work and whether his team was up to the challenge of fighting in the courts, according to a person who spoke to him.

In those conversations, Trump sounded tired and down, people who spoke to him said. Despite his skepticism, the President has suggested he has no other option than to continue fighting.

Others on his team, including his son Eric Trump and his personal attorney Rudy Giuliani, mobilized to Pennsylvania, which appears to be ground zero in the campaign’s legal efforts. Another team, including the former US ambassador to Germany Ric Grennell, was in Nevada.

Trump’s team has filed lawsuits in Pennsylvania and Michigan demanding vote counting be halted until their observers are allowed access to the process.

The campaign also filed suit in Georgia alleging improper vote counting in a single county and has sued the Clark County, Nevada, registrar challenging its process for observing ballot processing.

Trump’s campaign also said it was asking the US Supreme Court to intervene in a pending case challenging a Pennsylvania state court decision that allowed ballots to be counted after Election Day.

And it has demanded a recount in Wisconsin, though can’t formally request one until the canvas is completed, which could come as late as November 17.

The various filings and requests amount to long-shot legal arguments, several legal analysts said, focusing on such thin claims or affecting such a small portion of votes that they won’t decide the presidential election.

“Admitting defeat is not a plausible reaction so soon after the election, so they throw a lot of Hail Mary lawsuits at the wall and hope something sticks,” longtime Republican elections lawyer and CNN contributor Ben Ginsberg said.

He said the types of suits filed by Trump’s team aren’t indicative of a campaign that’s feeling optimistic.

DISCLAIMER: The Views, Comments, Opinions, Contributions and Statements made by Readers and Contributors on this platform do not necessarily represent the views or policy of Multimedia Group Limited.
Tags:
President
Trump
US Election
White House