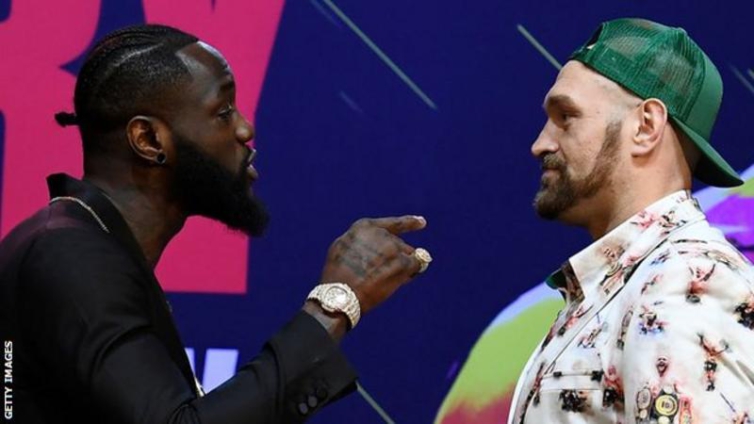 Tyson Fury does not expect to face Anthony Joshua in his next fight after Deontay Wilder requested $20m to step aside and allow their bout to go ahead.

Fury, 32, agreed to face Joshua, 31, in a highly-anticipated fight in August.

But Wilder’s team forced an arbitration hearing which concluded he had a contractual right to face Fury for a third time and by 15 September.

Fury posted his message on Instagram over a video of Wilder working out with trainer Malik Scott.

Scott has also posted, stating Wilder “declined and had no interest in step-aside money”.

“He wants blood and not step-aside money,” Scott posted. “Retribution is upon us.”

Fury stopped Wilder in seven rounds in February 2020 to become WBC world heavyweight champion, 14 months on from when the pair shared a thrilling draw in a first meeting.

A third fight was slated for 2020 but delays caused by the Covid-19 pandemic and an injury to Wilder prompted Fury to focus on facing Joshua.

The teams behind the two British heavyweights have engaged in lengthy negotiations. Joshua’s promoter Eddie Hearn was adamant their fight was agreed and on Sunday Fury told his Instagram followers he too has signed off on a 14 August bout in Saudi Arabia.

Just 24 hours later, Wilder’s team – who had always said he had a contract in place for a third Fury fight – found out their arbitration hearing was successful.

Hearn has since stated the situation is now out of his control and has set Fury’s team a deadline of the end of the week to resolve their situation with Wilder.

For the first time, Hearn has admitted he is considering alternative plans, notably a contest between Joshua and Ukraine’s Oleksandr Usyk, who is mandatory challenger for the WBO title.

Joshua holds the WBO, WBA and IBF belts, meaning a bout with Fury would have been the first at heavyweight for all four world titles.

DISCLAIMER: The Views, Comments, Opinions, Contributions and Statements made by Readers and Contributors on this platform do not necessarily represent the views or policy of Multimedia Group Limited.
Tags:
Deontay Wilder
Tyson Fury