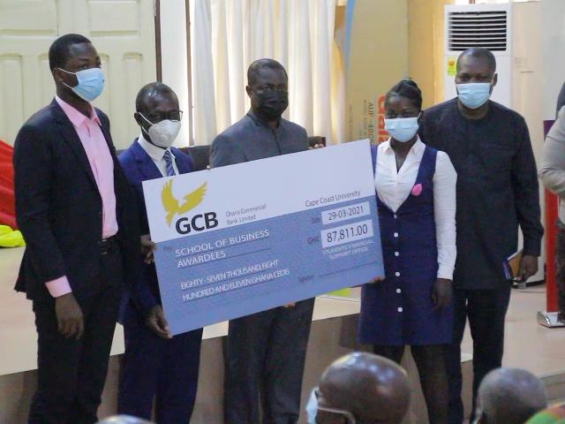 The University of Cape Coast (UCC) is set to roll out a work-study program where needy but brilliant and promising students can work on campus to cater for their needs while schooling.

Pro Vice-Chancellor of the University, Prof. Dora Francisca Edu-Buandoh says the intervention is to ensure that the dreams of students are not cut short as a result of their inability to pay their fees and cater for some basic needs.

Speaking at the maiden launch of the UCC Scholarship Award, Prof. Edu-Buandoh indicated the university was concerned about the struggles many students go through in their bid to pursue their dreams and the university would team up with the relevant stakeholders to ensure that such dreams are not curtailed.

She explained the work study program would ensure students that qualify to be supported wouldwork on campus and some of the university’s distance centres on hourly basis to earn some money without compromising their studies.

“We intend to engage them in the libraries, at the green house gardens, as ushers, as tour guides, script checkers, clerks and other identifiable jobs on campus,” he explained.

At the maiden awards, the fees of 377 students were paid while some who are on fee-paying had part of their fees settled and several arrangements made to make sure that they do not fall off the program.

In addition, 18 students from the eight surrounding communities were given concessionary award. Such students had to only satisfy the committee that they were indigenes of the communities

Prof Edu-Buandoh hoped the intervention would better the lives of the students.

“This is not only to support them financially but also to develop their career-related skills and bring up some work experiences of the students,” she stated.

Vice-Chancellor of the University of Cape Coast, Prof. Nyarko-Boampong indicated, the vision for setting up the institution was to make the UCC a leader in students’ financial support of world-wide acclaim, with innovative services including effective use of technology.

He says the essence of the facility would help students pay for their educational expenses, among other things, to ease their financial burden.

The SRC as well as other student bodies started the contribution of the funds to support their colleagues and subsequently, gained support from the university management.

“Over the years, the university had observed that many students face some difficulties in getting monies to pay their academic user fees and that’s why we have stepped in to help,” she said.

Meanwhile, the Omanhen of Oguaa Traditional Area, Osabarima Kwesi Atta II likened the institution to a caring father and asked the students to study hard to reciprocate the gesture.

He also prayed for the sustainability and expansion of the programme to cover more students.