University students are being urged to urinate in the shower in a bid to save water.

The Go with the Flow campaign is the brainchild of students Debs Torr and Chris Dobson, from the University of East Anglia (UEA) in Norwich.

They want the university's 15,000 students to take their first wee of the day while having their morning shower.

Mr Dobson, 20, said the idea could "save enough water to fill an Olympic-sized swimming pool 26 times".

The pair want those taking part to pledge their allegiance on Facebook and Twitter and have offered gift vouchers to the first people to join the challenge.

Mr Dobson said: "We've done the maths, and this project stands to have a phenomenal impact.

"With 15,000 students at UEA, over a year we would save enough water to fill an Olympic-sized swimming pool 26 times over.

"Imagine how big an impact it could have if we could get everyone in East Anglia, or even the UK, to change their morning habits.

"The campaign has been really divisive – people either seem to love it or hate it," added Mr Dobson.

"We're trying to challenge conventional behaviour, to start a debate on a resource that we largely take for granted." 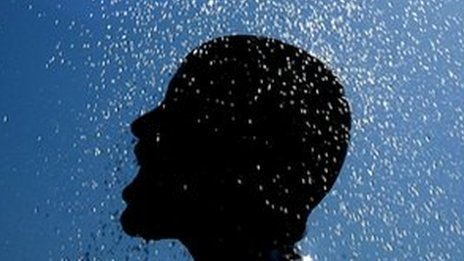 Based on an average flush costing 2p, campaigners say £7.30 per year, per person, could be saved if people spend their first morning penny in the shower

Mr Dobson said they had taken advice from a professor and had undertaken online research about potential health risks for people using communal showers.

He said: "As long as the water is flowing there is no hygiene risk as urine is sterile but we would encourage that every person using the same shower consents to the challenge and if not that they don't take part."

Mr Dobson and Ms Torr are representing the UEA in the Npower Future Leaders Challenge to inspire students to come up with an environmental initiative for their campus.

A UEA spokeswoman said the university supported "students in their efforts in these initiatives and encouraged all forms of enterprising, entrepreneurial and employability activity".