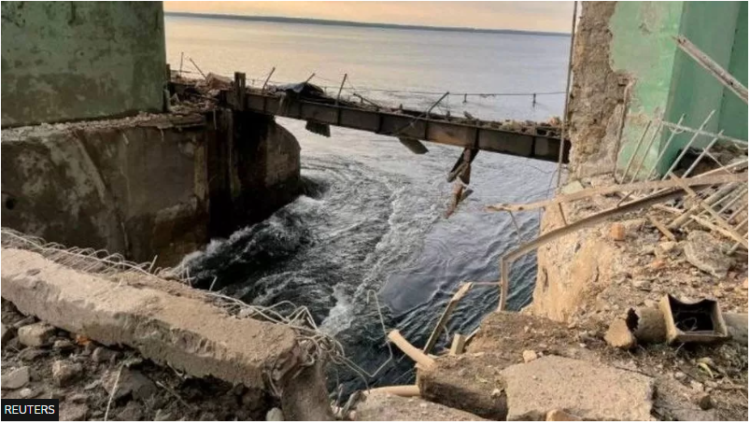 Officials in the southern Ukrainian city of Kryvyi Rih say 112 houses have been flooded after Russian missiles hit a major reservoir dam nearby.

Residents of as many as 22 streets in two districts were urged to evacuate, city head Oleksandr Vilkul said.

He said that overnight two blasts were carried out to increase the water flow from the dam to the Inhulets river, and the situation was now “under control”.

Ukraine said the strike was revenge by Russia for its recent counter-attack.

President Volodymyr Zelensky described Russia as a “terrorist state” after Wednesday’s strike on the Karachunivske reservoir.

“You are weaklings who fight civilians,” Mr Zelensky, who was born in Kryvyi Rih, said in his late night address on Wednesday. “Scoundrels who, having escaped from the battlefield, are trying to do harm from somewhere far away,” he added.

This was an apparent reference to Ukraine’s recent military successes in a swift counter-offensive in the country’s north-eastern Kharkiv region. It has seen Ukraine’s army reclaim swathes of occupied territory, forcing Russian troops to retreat.

The precise scale of Ukraine’s gains has not been verified by the BBC.

In his speech, Mr Zelensky said the reservoir had “no military value at all”.

Water supplies were affected by the attack in the city where more than 600,000 people lived before Russia’s full-scale invasion of Ukraine on 24 February. Water broke through the dam and overflowed the banks of the river, officials said.

But speaking on Thursday morning, Mr Vilkul said water levels in the Inhulets river had now “dropped considerably”. He said there were no casualties.

Moscow has not publicly commented on the reported missile strikes.

On Wednesday morning, Mr Zelensky visited the recently recaptured city of Izyum, a key logistics hub in the Kharkiv region.

He thanked troops who took part in the counter-offensive, and pledged that the Ukrainian flag would return to every city and village in the country.

The pace of the Ukrainian advance appears to have taken Russian forces by surprise, with reports of some of Moscow’s forces abandoning their uniforms to blend in with civilians.

Russia has admitted that its forces have left some towns in the Kharkiv region – but refused to call it a retreat, instead insisting that its forces were regrouping. This claim was widely ridiculed in the West and even in Russia itself.

Locals in the town of Balakliya, also in the Kharkiv region, told the BBC that Russian troops had tortured civilians at the town’s police station during their occupation, while others recounted being electrocuted while in detention.

While Russia still controls around a fifth of Ukraine’s territory, towns in the eastern Donbas region that fell early in the war have now also become the target for Ukraine’s military. Fierce fighting has been reported there in recent days.

After failing to capture Ukraine’s cities, including the capital Kyiv, in the north and north-east in March, Moscow said it was now focusing on the Donbas – parts of which were already under the control of Russian-backed rebels before the Russian invasion.

On Monday, the Kremlin insisted that it would press on with its invasion “until all the goals that were originally set are achieved”.

A separate Ukrainian counter-attack is continuing in the southern Kherson region, although troop advancements there have been slower.

DISCLAIMER: The Views, Comments, Opinions, Contributions and Statements made by Readers and Contributors on this platform do not necessarily represent the views or policy of Multimedia Group Limited.
Tags:
Flood
Missiles
Ukraine War