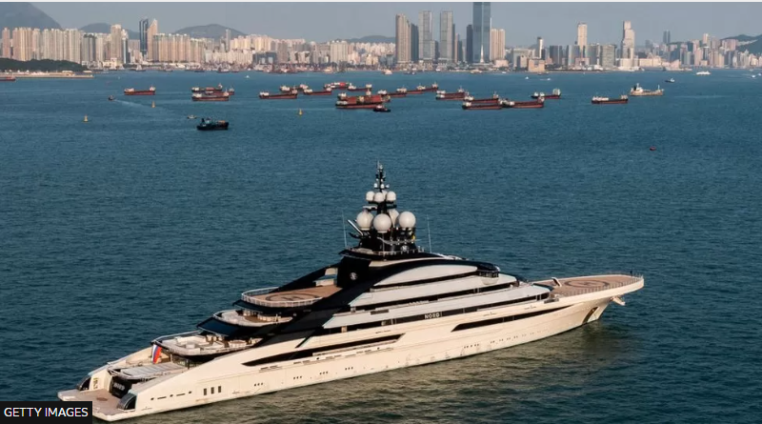 South Africa says it will allow a sanctioned Russian oligarch to dock his superyacht in Cape Town.

But a spokesman for President Cyril Ramaphosa said he saw “no reason” to comply with Western sanctions.

“South Africa has no legal obligation to abide by sanctions imposed by the US and EU,” Vincent Magwenya told reporters in Pretoria on Tuesday.

“South Africa’s obligations with respect to sanctions relate only to those that are specifically adopted by the United Nations,” Mr Magwenya added, noting that Mr Mordashov is not under any UN-sponsored sanctions.

Western countries and their allies have imposed sanctions on more than 1,000 Russian individuals and businesses in response to Russia’s invasion of Ukraine.

Mr Ramaphosa’s government has so far avoided directly criticising Russia, abstaining in several UN votes that have expressly condemned the war. Pretoria has also called for a negotiated settlement to end the conflict.

On Monday, Cape Town Mayor Geordin Hill-Lewis – a member of the opposition Democratic Alliance party – urged officials to block the superyacht’s entry, writing on Twitter that there could be “no place in our city for accomplices to, and enablers of, Putin’s war”.

“It must be said that so far, our country’s foreign policy conduct in relation to Russia’s illegal, imperialist war has been nothing less than shameful,” Mr Hill-Lewis added in a further statement. “Here is an opportunity to correct some of those errors of judgement and stand up for what is clearly right.”

It is unclear whether Mr Mordashov is actually onboard the vessel. Speaking to local media on Sunday, Mr Hill-Lewis suggested that the billionaire was travelling on his yacht.

But last week a spokesperson for the oligarch told Bloomberg News that he had been in Moscow since his yacht arrived in Hong Kong.

Hong Kong’s government recently offered similar justifications when refusing to prevent the entry of the superyacht, with Chief Executive John Lee saying the city would be accountable to UN sanctions but not “unilateral” ones imposed by “individual jurisdictions”.

Prior to the war, Mr Mordashov was Russia’s wealthiest man. The 57-year-old built a fortune of some $29.1bn (£25.92bn) through his steel and mining company Severstal.

Early in the conflict he was targeted by extensive Western sanctions due to his links with Mr Putin. But the billionaire has questioned the value of the moves, saying he had no involvement in Russian politics and maintains little influence with the Kremlin.

Mr Mordashov has already lost one of his smaller vessels, the 215ft Lady M, to Western sanctions after it was seized by Italian police in March.

But The Nord is believed to be his biggest yacht asset. The vessel is larger than a football field and is described as one of the world’s most extravagant boats, according to Forbes.

Shortly after the outbreak of the conflict in Ukraine, the yacht – which features two helicopter pads, a swimming pool and a cinema – left the Seychelles for the far-eastern Russian port of Vladivostok. The move was seen as a bid to avoid the fate of the Lady M.

But experts say owners like Mr Mordashov face serious issues finding international ports capable of maintaining superyachts. Most are in Europe, where the vessels would be instantly seized.

DISCLAIMER: The Views, Comments, Opinions, Contributions and Statements made by Readers and Contributors on this platform do not necessarily represent the views or policy of Multimedia Group Limited.
Tags:
South Africa
Ukraine War