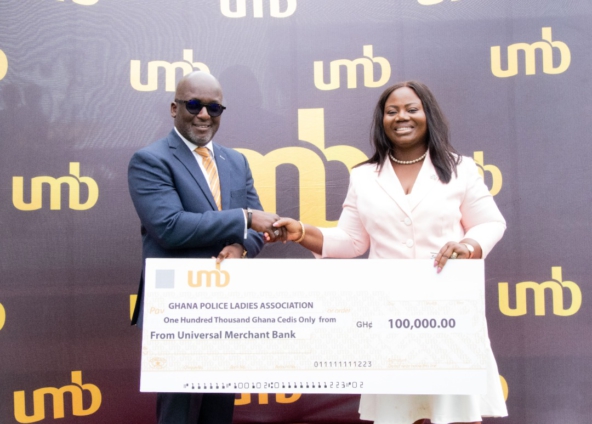 The Police Ladies Association (POLAS) as part of its 70th Anniversary celebration has received a GH¢100,000 support from the UMB Bank.

The colorful ceremony which was held at the forecourt of the police headquarters in Accra was well attended by both serving and retired members of the police service, Dr. Zanetor Agyeman Rawlings, MP for Korle Klottey constituency, captains of industries, sister organisations from other security organizations including the Ghana Armed Forces, the customs division of the Revenue Authority, the Prisons Service, the police service and EOCO.

The Chief Executive Officer of UMB, Nana Dwemoh Benneh in his presentation to the National President of POLAS and Director General of the Economic and Organized crime, Madam Tiwaaa Addo-Danqauh, said’’ the pride of every bank is its customer base, and in POLAS we have the most excellent customer indeed’’.

He further noted that in this same year, UMB was also celebrating its 50th Jubilee and so the celebration is felt more keenly.

He indicated that since 1972, the bank had taken great pride in serving Ghana, especially the public sector. ‘’ We will continue to take great pride in serving the police service and POLAS and look forward to offering bundled services including insurance and recruiting packages to our most diligent and hardworking citizens in the forces he added’’.

Recounting the history of POLAS, Madam Tiwaa-Addo-Danquah noted ‘’ Female participation in policing in Ghana began in 1952 when the first 12 ladies were recruited into the service. Since then ladies have served the colours diligently in the service, though constituting 28% of the service in strategic, tactical, and operational roles across board. This impact has been felt not only in Ghana but has brought to bear on peacekeeping missions abroad.’’

The Inspector General of Police, Dr. George Akuffo Dampare, in a speech read on his behalf by Commissioner of Police (COP) Christian Tetteh Yohunu congratulated POLAS for their anniversary.

He admonished POLAS to continue to align and support the transformation agenda of the service.

Mr. Ambrose Derry, the Minister of interior speaking through Mrs. Adelaide Annor-Kumi, Chief Director of the Ministry of Interior earlier launched the anniversary.

The minister used POLAS to continue living true to their motto ‘’ ARISE’’ to continue to work towards full gender equality in all things related to the service.