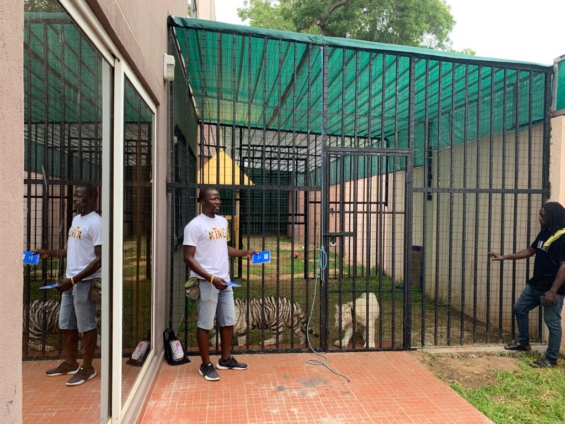 There is an uneasy calm around the WondaWorld Estates in Accra where the estate’s millionaire owner, Nana Kwame Bediako, popularly known as Cheddar, is keeping two tigers.

Today, the wildlife Division is expected to remove the carnivorous animals after residents said they feared for their lives with the wild animals in the neighbourhood.

The Wildlife Conservation (Amendment) Regulations of 1989 state that;

(6) Any person who contravenes any of the provisions or regulation 6A or 6B commits an offence and shall on conviction be liable to a fine not exceeding ¢10,000 or to imprisonment for a term not exceeding 12 months or both.

It’s not clear whether the businessman has obtained this license.

On Thursday, the Police said it was taking steps to remove two tigers from a private residence in Accra.

This follows complaints from residents of Wonder World Estates, Avenue Lincoln near the British High Commission at Ridge over their presence in the community which makes them feel unsafe.

They insist that attempts to get the facility’s owner or management to evacuate the tigers have proven futile.

The Police have heeded the residents’ concerns and have directed the Forestry Commission to facilitate the relocation into a much safer zone.

In a statement released on Thursday night, the service told the Wildlife Division of the Commission to undertake the task in order to provide respite to the residents of the community.

The owner of the big cats, Freedom Jacob Caesar, a businessman said he acquired them during an auction in Dubai.

Defending the move, he told the media that the rationale behind owning the seven-month-old predators was to promote tourism in the country and not meant to harm anyone.

He said they were not harmful to the residents as he has put in place adequate security so they do not harm anyone.