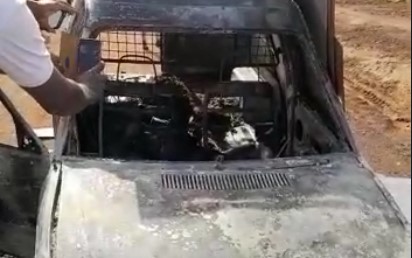 The Upper East Regional Security Council (REGSEC) says it is beefing up security along the country’s border with Burkina Faso and Togo.

This move comes after unknown gunmen stopped and burnt a taxi driver alive at Nakom in the Pusiga District of the Upper East Region.

In an interview with JoyNews’ Samuel Mbura, the District Chief Executive for Pusiga, Abdullai Zubeiru stated that the attack has come as a surprise to residents.

Narrating the incident to JoyNews, Mr Zubeiru said he had a call from a resident when led to the rush to the scene.

Upon reaching the scene, “they saw that a car was in flames.”

“They tried to douse the fire and after they finished doing that, they realise that there was a body in the car which was burnt beyond recognition,” he said.

According to him, an investigation has already commenced into the cause of the incident.

He further assured the residents in the community that “the Security Council is up and they are doing so much to ensure that such incident do not repeat itself within the jurisdiction.”

“There are so many plans that we have already put in place to ensure we don’t allow in people that we don’t know and all the security set up are doing so much in that regard,” he added.

DISCLAIMER: The Views, Comments, Opinions, Contributions and Statements made by Readers and Contributors on this platform do not necessarily represent the views or policy of Multimedia Group Limited.
Tags:
Gunmen attack
Pusiga
Upper East Region