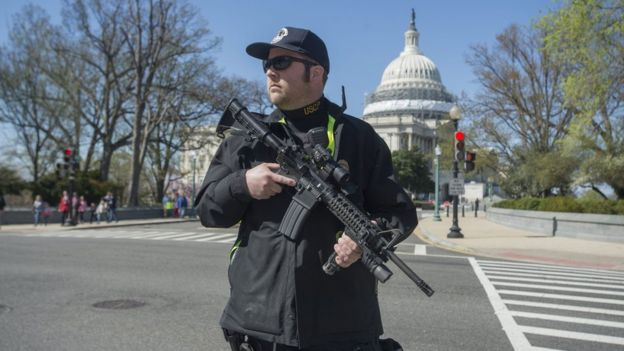 Police shot an armed man as he tried to enter the US Capitol building's visitor centre in Washington, officials said.

A female bystander suffered minor injuries when police fired at the suspect.

Officials said the suspect was known to Capitol police and ABC News reported that the man had disrupted a House session last year.

The massive complex was placed on lockdown, but the security precaution has since been lifted.

US media identified the suspect as 66-year-old Larry Dawson of Tennessee.

In October, he was arrested for interrupting a Congressional session, yelling "prophet of god".

Washington's city police called the shooting an "isolated" incident, saying there is "no active threat" to the public.

Officials originally said a police officer had been hurt, but Capitol Police Chief Matthew Verderosa said no officers were shot.

"There is no reason to believe this is anything more than a criminal act," Mr Verderosa said.

He said the suspect's vehicle was found on Capitol grounds and the weapon was recovered.

The gunman was undergoing surgery at a hospital and his condition was unknown, Mr Verderosa said.

US Congress is on recess for the Easter holiday, but some members of Congress and staff members were on site.

To enter the US Capitol or any Senate or House office buildings, visitors must go through a metal detector and weapons are not permitted.

Mr Verderosa said the suspect pulled out his gun just before being screened by those metal detectors.

Diane Bilo, a woman from Ohio, told the Washington Post her husband heard the shot.

"My husband said he heard a shot followed by a full clip," she said. Multiple members of Congress have posted to social media, reporting that their staff were safe.

In 1998, an attacker shot and killed two police officers at the Capitol. The visitor centre was built as a way to strengthen security after the shooting.

Many tourists are in Washington for the annual Cherry Blossom festival – about 1.5 million people visit the city during the four weeks of the festival.

The White House was also put on lockdown temporarily due to a separate incident.