US Open: Serena Williams’ career over after Ajla Tomljanovic defeat 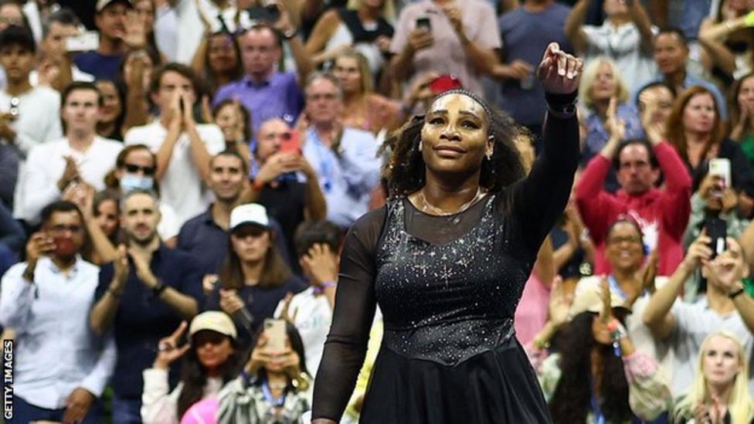 Serena Williams waved farewell to the US Open – and her illustrious career – amid emotional scenes after she lost to Australia’s Ajla Tomljanovic on a thrilling night in New York.

Williams, who turns 41 this month, expects it to be her final match.

It will end a 27-year professional career that brought 23 major singles wins and sees the American widely labelled as the greatest of all time.

The former long-time world number one saved five match points in what proved to be the final game but was powerless to stop a sixth.

Almost everyone who could rose to their feet when she departed the court on Arthur Ashe Stadium – the scene of her first major triumph in 1999 and five more of the finest wins in her storied career – for what she intends to be the last time.

As she waved goodbye and gave a signature twirl, Tina Turner’s pop classic ‘Simply The Best’ boomed out over the sound system.

Asked if she would reconsider retiring after her performances this week, Williams said: “I’m literally playing my way into this and getting better. I should have started sooner this year. I don’t think so, but you never know.”

Williams was overcome with emotion when she was interviewed in the middle of the court, thanking her family, team, the crowd and her fans across the world for their support over the years.

“I thank everyone that’s here, that’s been on my side so many years, decades. Oh my gosh, literally decades,” said Williams, who played her first professional tournament as a 14-year-old in 1995.

“But it all started with my parents. And they deserve everything. So I’m really grateful for them.

“And I wouldn’t be Serena if there wasn’t [sister] Venus, so thank you, Venus. She’s the only reason that Serena Williams ever existed.”

Tomljanovic, who moves into the fourth round and plays Russia’s Liudmila Samsonova, stepped to the side and applauded her opponent as she took the microphone.

The world number 46 produced a phenomenal performance to block out the noise and sense of occasion, illustrated by her clinical hitting in the final stages of a brutal contest which lasted three hours and five minutes.

Williams has long been more than a tennis player and it was a sign of her status – as an American icon and one of the world’s most recognisable sport stars – that she announced her retirement in an essay for glossy fashion magazine Vogue.

Although she did not use the word retirement itself, preferring to say she was “evolving away” from the sport, her plan is to end her glittering career this fortnight at her home major.

Like every night she has appeared this week, Williams emerged on to court after being introduced as the ‘Queen of Queen’s’ – the borough of New York where the tournament is held – in a specially-commissioned video montage narrated by American rap star Queen Latifah.

The A-Listers have been out in force on Ashe this week, with Vogue editor Anna Wintour and golf superstar Tiger Woods previously sitting in Williams’ box.

On Friday night it was R&B singer Ciara and her husband Russell Wilson, who is one of the country’s biggest NFL stars, alongside members of Williams’ family.

Williams wore the glittery, figure skating-inspired dress she had specially created for the tournament, along with diamond-encrusted trainers, to add further pomp to the occasion.

Right to the end, Williams put on a show for the almost capacity 24,000 crowd.

The 40-year-old played some of her best tennis in a long while as she fought to prolong her career, putting on one final memorable show for those lucky enough to witness it.

How Williams’ final match played out

Waiting for one of the greatest icons in the sport, as a partisan home crowd was being whipped up, would test the mettle of even the most nerveless players.

Williams breezed in with Tomljanovic already long out on the court, having arrived first after touching a bronze plaque at the players’ entrance inscribed with Billie Jean King’s famous ‘Pressure is a privilege’ quote.

The American looked the more tense and showed it in the first game, with Tomljanovic not looking fazed when she broke her opponent’s serve.

But Williams settled quickly in the next game as Tomljanovic could not consolidate, going a break ahead for 5-3 and serving for the opening set.

Then a poor game appeared at the worst possible time for Williams. Unforced errors from her racquet contributed to Tomljanovic breaking back for 5-4 as did, almost as crucially, a net cord trickling back to Williams’ side of the court at 30-30.

Growing in confidence as a result of the break, Tomljanovic hit clean winners off both wings – either side of a double fault from Williams – to break again for 6-5 and leave her serving for the opener.

She raced into a 40-0 lead and sealed the set at the third opportunity with an inch-perfect forehand winner.

Not for long, however. The world number 605 broke for a 2-0 lead in the second set and moved 4-0 ahead, thanks to some ferocious winners and helped by two double faults from her opponent, to send Ashe back into raptures.

Williams was turning back the clock again at this point and was described by British former player Laura Robson, working for BBC Radio 5 Live as an analyst, as playing the best tennis she had seen her play “in years”.

A slip in concentration allowed Tomljanovic to claw back one of the breaks, but Williams locked in again and held from deuce for 5-2.

That sparked an impassioned celebration from Williams – a trademark roar complemented with a fist clench and foot stamp as she bent towards the court – as everyone in the place erupted once again.

Anticipation hung in the air as Williams tried to level the match at the first attempt, but she missed four set points and that triggered a fightback from Tomljanovic.

Sensing Williams needed their help, the crowd chanted her name around the cavernous arena going into the tie-break and she responded with a composed passage of play to finally level the match after an 84-minute set.

Now it was a straight one-set shootout.

Williams looked to be suffering a dip in energy – understandably after her physical efforts this week in only her fourth tournament in more than a year – as she fell 5-1 behind in the decider.

The end looked inevitable but not before she mustered one last act of resistance.

In a final game lasting 15 minutes and 22 points, she eventually succumbed by planting a forehand into the net, which led to the final – potentially loudest – ovation of her career.

DISCLAIMER: The Views, Comments, Opinions, Contributions and Statements made by Readers and Contributors on this platform do not necessarily represent the views or policy of Multimedia Group Limited.
Tags:
Ajla Tomljanovic
Flushing Meadows
Serena Williams
US Open 2022