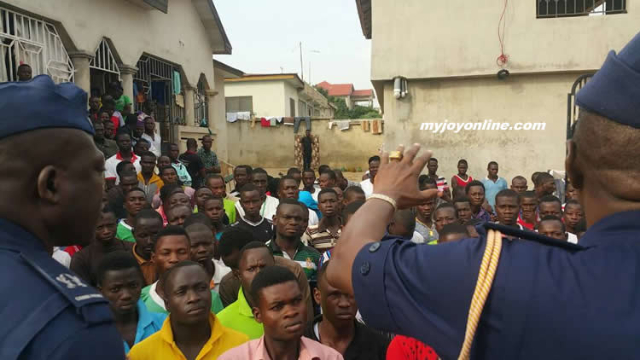 Four men have been arrested in the Ashanti regional capital, Kumasi, for allegedly camping 580 youth in a shady recruitment business.

The police swooped in on the group at about 8:30 am and found them camped in three separate houses at Atimatim, close to Tafo in the capital.

Police believe the recruitment is suspicious activity but the leaders say they were assembled by a networking company called Qnet.

One of the four, Adam Yakubu, who spoke to Luv FM's Erastus Asare Donkor explained, they ask interested persons to rope in their "best friends" and "people you love" and want to help prosper.

The earnings are not fixed, he said and revealed he made $3,000 this week.

Explaining why a lot of the recruits are Northerners, Adam Yakubu said: "the northerners heard it first". He said many of them are suffering and found the "business" a path out of poverty.

Yakubu could not give details of the company's legal status explaining he has only been in the business for not more than four months.

"Unless I ask our top leaders", he said after he was asked if the venture is duly registered.

The Ashanti regional minister Simon Osei-Mensah who accompanied the police, interrogated the young men, and wondered what the nature of the business is.

The police have moved the 580 youths to the Jubilee Park for further screening. They are treating the group as a security threat.