Video: I thought Stonebwoy, Shatta Wale would learn from my experience – Gemann 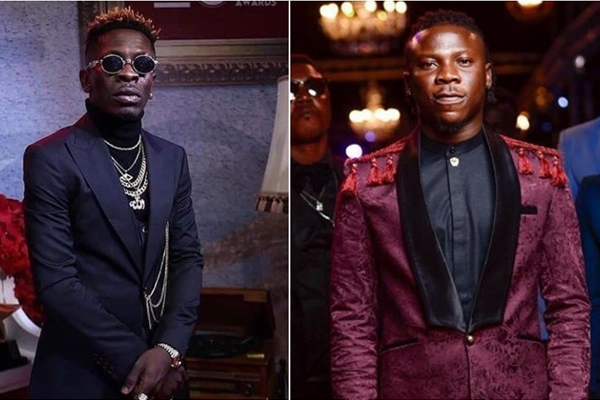 From being the biggest name in Ghanaian music to becoming a criminal, Gemann thought his bitter life story would serve as a lesson to a lot of people.

It was his hope that people like Stonebwoy and Shatta Wale would take a cue from his experience not to repeat the same mistake but events at the 20th edition of the Vodafone Ghana Music Awards (VGMA) makes him think otherwise.

Nana Agyeman, popularly known as Gemann was undoubtedly one of the country’s biggest musical exports in the late 1980s and early 1990s.

He became a national dance champion in the late 1970s and a world dance champion soon after that. That win saw him touring the world in private jets as a Michael Jackson look-alike.

Watch: From celebrity to convict and now Man of God; the Gemann story

Gemann was on top of the world at a very tender age but that glamorous world of celebrity unexpectedly came tumbling down tragically on January 9, 1995.

On that fateful day, Gemann shot and killed a taxi driver at Dome in a scuffle over 2,000 cedis [present day 0.20 pesewas].

Gemann said he had about 1.6 million cedis then [present day ¢160] with him at home but shot and killed someone because of 0.20 pesewas.

He was tried and convicted of murder and he was to spend 14 years in prison half of which was on death row.

He was released on January 9, 2009, on a presidential pardon from former President, John Agyekum Kufuor.

Twenty-four years after that incident, Gemann, now a pastor, thinks his life story should be a lesson to many including Stonebwoy and Shatta Wale who hardly see eye-to-eye.

Shatta Wale and Stonebwoy were arrested by the police on Sunday over a brawl that erupted between their camps at the 20th anniversary of the VGMA.

Pandemonium broke out shortly after Stonebwoy was announced the winner of ‘Reggae/Dancehall Artiste of the Year’ when Shatta Wale and his team were seen going towards the stage, their intentions were unclear.

Shatta Wale, born Charles Nii Armah Mensah, later claimed that he was going on stage to congratulate Stonebwoy. The two artistes were later released on Monday and appeared in court on Wednesday.

Commenting on the incident in an interview via Skype from his base in the US on News Desk on JoyNews with Bernice Abu Baidoo, Gemann said, “I was very sad when I saw the video.”

According to him, Stonebwoy’s explanation that he pulled out the gun to “frighten” Shatta Wale was the “same thing I thought 24 years ago when I pulled out a gun. I thought I was just going out to frighten a taxi driver, unfortunately, the gun went off and he died.”

“He [Stonebwoy] was very lucky that the gun did not go off and that’s why I am saying that they should stay away from guns because they are weapons of destruction and they do not protect. It is only God who protects,” the ‘Highlife in G Major’ hit singer said.

Gemann observed it “is just totally wrong” for artistes to carry guns and that, they mostly do that because of “pride”.

He said he never carried his gun around and believes strongly that “most people copy blindly” what happens in the West.

“I was of the view that people would have learnt from what happened to me…At least you learn from people’s experience,” the musician-turn Pastor said.

“All the people they think they are copying, where are the Tupacs…the Notorious BIGs and those people who went in the gangster way…?” he quizzed.

Gemann believes strongly that if Shatta Wale had asked his followers to sit when he stood up to walk on stage, they would have heeded to this directive. “They can cause their followers to change.”

He strongly urged Stonebwoy and Shatta Wale to fire their managers because “If you surround yourself with foolish people, you become a fool…”

During a post-event press conference on Thursday, Charterhouse and the Awards Board announced that they have stripped Stonebwoy and Shatta Wale of all the awards they won at the Awards this year.