Vodafone celebrated for its engaging and creative advertisements 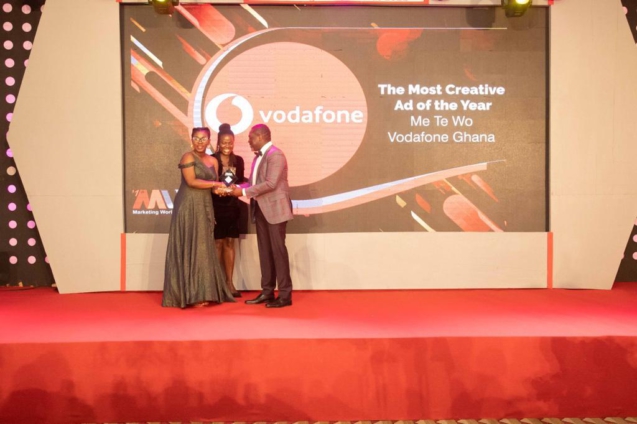 Vodafone Ghana has been celebrated for its engaging and creative advertisement at the 2022 Marketing and Communications Awards.

The telco picked up three prestigious awards, including the Most Creative Ad of the Year for Vodafone Cash’s sensational ‘’Me Te Wo’’ ad.

The TV commercial creatively demonstrated that Vodafone Cash is the only mobile money operator that has waived its telco charges to enable customers to send money to any mobile money service provider for free; only the mandatory e-levy applies.

Over the period, Vodafone has delivered highly successful advertising campaigns that solidify its position as the most engaging brand across various channels. Vodafone connects with its customers while inciting the desired action by using clever, funny, and profound messaging and content that is memorable years after first being seen or heard.

Vodafone’s thematic data campaign rehashed the seemingly endless possibilities the internet offers if we dare to dream. In the video, a genius young boy and his sister engineer a solution that allows their physically challenged mother to remotely open the door and switch off the light.

The TV ad for the 10th edition of Vodafone’s award-winning TV programme, Healthline, also featured the TikTok sensation, Dr Likee, in an encounter with a medical doctor. The advert, which is aimed at discouraging self-medication, features a hilarious encounter between Dr Likee and a medical doctor. Dr Likee, who is the patient, is seen displaying various herbs, pills, concoctions, leaves, and other local remedies that he is using to treat a stomach upset.

The reigning 2021 CIMG Telecoms Company of the Year also picked the Most Innovative Product for its free Mobile Money Interoperability (MMI) service. The company’s annual Ashanti Month campaign, which gives a special focus to the Ashanti Region by undertaking a score of socially impactful initiatives in June every year, was also named the Regional Campaign of the Year.