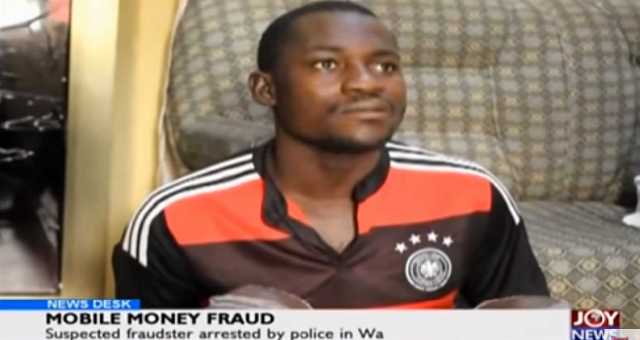 Police have arrested a 32-year-old man for engaging in mobile money fraud in Wa in the Upper West Region.

The suspect, Nurudeen Abdul-Ganiyu, has allegedly duped over 50 people in the last two years to the tune of GHÈ»150,000.

“We have been on a manhunt for him since August and finally caught him after someone tipped us that he was in Gurugu in Tamale,” the Deputy Regional Police Commander, ACP Peter Ndekugri, told Joy News’ Rafiq Salam.

The suspect confirmed that he had registered numerous SIM cards with different names explaining “all you have to do is mention the supposed ID number of the requested identification card.”

He revealed that his first victim was the former Upper West Regional Chairman of the governing New Patriotic Party (NPP), Alhaji Abdul-Rahman Short.

Abdul-Ganiyu admitted, “anytime I am talking to someone I change my voice so already fallen victims do not recognise my voice.”

He revealed that most of the money has gone into the building of his three-bedroom bungalow.

ACP Peter Ndekugri stated, “we have about 13 names of people he has conned as of now and the least amount he took from them is GHÈ»1,500.”

“Service Providers do not verify identification numbers given to them for the registration process and issue the sim cards,” he stated.

He appealed to all service providers to strengthen their security processes in all aspects to minimise mobile money fraud.