We are committed to constructing National Vaccine Institute – Akufo-Addo 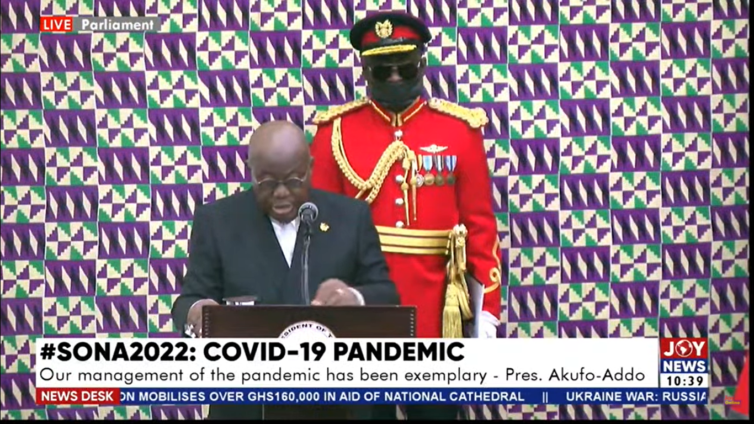 President Akufo-Addo has reiterated his commitment to constructing the National Vaccine Institute, which will spearhead the manufacture of vaccines to meet national and regional needs.

Delivering the State of the Nation Address (SONA), the President noted that the Covid-19 pandemic taught the nation some “very hard lessons”, thus, the need to take cues and make the necessary arrangements.

According to him, the “belief in the need to be self-sufficient was reinforced when vaccine nationalism was played out blatantly by the rich and powerful countries.”

The President noted that said that the establishment of the Institute will be actualised and put the country in good stead should there be another contagion.

“The Presidential Vaccine Manufacturing Committee, which I set up to respond to this obvious deficiency, has put in place a comprehensive strategy for domestic vaccine production and the establishment of a National Vaccine Institute to implement the strategy.

“This will enable us to begin the first phase of commercial production in January 2024,” he said on Wednesday.

The President subsequently appealed to Parliament to support the Executive’s objective.

“A Bill will shortly be brought to you, in this House, for your support and approval for the establishment of the National Vaccine Institute,” he said.

President Akufo-Addo, in his 26th update on Sunday, July 25, 2021, announced that government has committed $25 million for the establishment of a National Vaccine Institute to facilitate the local production of vaccines.

He said the Institute will be charged with delivering six clear mandates; establishing local vaccine manufacturing plants, deepening Research and Development (R&D) for vaccines in Ghana and upgrading and strengthening the FDA.

Two months ago, the Health Minister, Kwaku Agyeman-Manu, divulged that the government has finalised a bill tabled before Parliament to set up a National Vaccine Institute.

He also noted that government has partnered with some German Scientists in the country’s quest to establish a vaccine manufacturing plant.

According to him, the scientists and some selected companies will embark on research to achieve the objective.

“We are getting closer. We are partnering with some German Scientists. They visited once, and as I speak, they are currently in town having some discussions with the Vaccine Committee,” he told the press in January.

Based on these works behind the scenes, President Akufo-Addo is optimistic that by 2024, the National Vaccine Institute will be operational.