'We are on top of terrorism threats' - National Security Ministry - MyJoyOnline.com

‘We are on top of terrorism threats’ – National Security Ministry 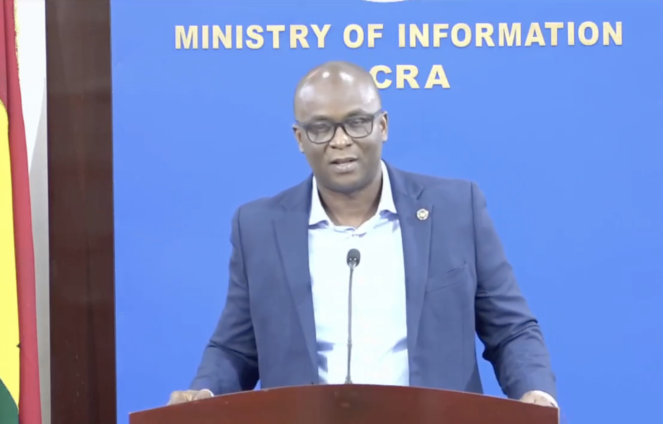 The National Security Ministry has assured Ghanaians that there is nothing to fear amidst the growing terrorism threats.

According to the Deputy National Security Coordinator, Edward Asomani, the Ministry is on top of the situation.

He stated that the Ministry will do whatever it takes to ensure the nation’s security is not compromised in any way.

When he took his turn at the Information Ministry’s Meet The Press series on Sunday, he said the country has robust security and intelligence architecture to deal with such matters.

He stated that the security agencies could not function properly without the support and cooperation of Ghanaians.

With this, he charged all Ghanaians to be on the look for suspicious characters and report the same to the security agencies for onward action.

“We are a proud people with robust security and intelligence architecture, but it is not complete when Ghanaians are not on board with us.”

“That is why we are here today to seek the support of all Ghanaians. We are not panicking, we are on top of the situation, but we need the help of everybody in our jurisdiction.”

Meanwhile, on Tuesday, May 24, the Ministry will launch a campaign to assist Ghanaians in reporting possible terror attacks.

The campaign is dubbed “See something, say something”

The National Security Minister, Albert Kan-Dapaah, has already charged Ghanaians to be vigilant in the wake of increased terrorist attacks in the subregion.

According to him, the activities of terrorists have become prevalent in recent times, and therefore the need for all citizens to pay closer attention to their ‘personal and communal security”.

In a statement on Tuesday, May 17, the sector minister also disclosed that, based on information available to his outfit, Ghana has become a country of interest to terrorists, hence the need for all persons to be on guard.

“The Ministry is making a strong appeal for heightened vigilance in areas of mass gatherings, especially at public places of entertainment and worship, such as churches and mosques.

“The employment of guards, security gadgetry, and lighting of the areas surrounding the areas of public gatherings would all help, but nothing beats the vigilance of each of us individuals, taking personal responsibility and looking out for each other.

Also, in a tweet on Saturday, May 21, the Information Minister urged the public to report suspicious activities or packages to security agencies immediately.

“Very worrying reports of potential attacks of extremist elements targeted at Ghana. As we heighten the alertness of intelligence and security agencies, we all need to be more security conscious and be quick to report any suspicious persons or packages to security agencies.”