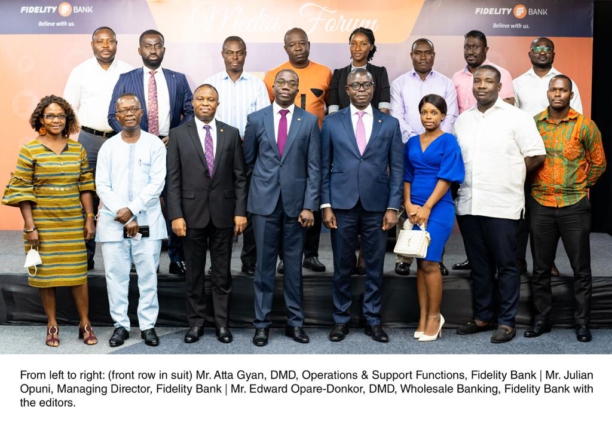 In appreciation of the media’s influential role in its success over the last 15 years, senior executives of Fidelity Bank Ghana, led by its Managing Director, Julian Opuni, have engaged with editors from key media houses to thank them for their support.

The engagement, which was held at the Head Office of Fidelity Bank at Ridge – Accra, also served as an opportunity for the management of the Bank to tell the Bank’s success story and elucidate its future plans as it celebrates 15 years of Banking Excellence.

During the engagement, Mr. Julian Opuni highlighted the history of the Bank, noting that the Bank’s success is attributed in a large part to the ethos established by its founders – a customer-centric approach and a commitment to creating value for all stakeholders.

Commenting on the Bank’s support of the SME sector, Mr. Opuni noted that “As the largest privately-owned Ghanaian bank, we feel we have an even larger role to play in the SME space. We have therefore over the years invested in this area; accordingly, we established the Fidelity SME Academy to help SMEs build their capacity. We also launched the Fidelity Young Entrepreneurs Fund to support youth-led businesses with access to finance and non-finance resources among many other initiatives.”

He also reiterated the Bank’s burgeoning partnership with Development Bank Ghana as a means to provide further financial muscle to the nation’s vibrant and growing SME sector.

To round up his exposition on the Bank’s progress over the past 15 years, the MD highlighted notable milestones chalked with respect to the Bank’s sterling financial performance, myriad global and local recognitions as well as the various outstanding initiatives introduced by the Bank to support economic growth and financial inclusion.

He noted that these successes have been possible as a result of the collaborative efforts of the management team, staff and all stakeholders of Fidelity Bank Ghana.

Mr. Opuni also commended the media for its unflinching support for Fidelity Bank throughout the Bank’s meteoric 15-year journey. He expressed the belief that with the continued support of the media, the Bank would continue to rise and emerge as a dominant continental and global force in the ensuing years.

He stated: “We value the work you do as the media because we acknowledge that without your support, we may never have been able to publicise our products and services as well as the good work we do for our customers and Ghanaians in general.”

On their part, the editors expressed gratitude to Fidelity Bank for the opportunity to interact with its management team as it charts the way forward.

They pledged their commitment to continue playing their critical role to tell positive stories regarding advances in the nation’s finance and banking sector, and serve as watchdogs to ensure ethical propriety, transparency and excellence.

The Management of the Bank announced that in the coming weeks, it will launch a social impact initiative dubbed ‘Orange Impact’ in line with its culture of giving back to society. The ‘Orange Impact’ initiative will also serve as means of saying thank you to Ghanaians for keeping faith with Fidelity Bank.

DISCLAIMER: The Views, Comments, Opinions, Contributions and Statements made by Readers and Contributors on this platform do not necessarily represent the views or policy of Multimedia Group Limited.
Tags:
Fidelity Bank
Mr. Julian Opuni