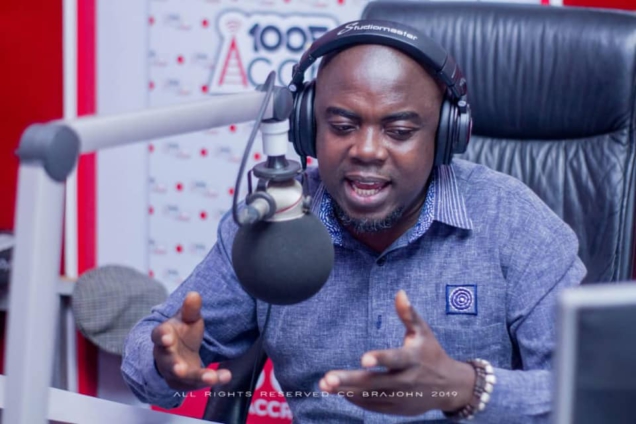 The Class Media Group (CMG), operators of Accra FM has expressed worry over the arrest and detention of one of its Journalists, Kwabena Bobie Ansah.

The presenter was arrested on Thursday night at 10:00pm right after his political talk show ended, by persons purported to be National Security operatives.

Bobie Ansah is currently being prosecuted for alleged publication of false news and offensive conduct.

The Media Group in a statement issued on February 11, said it received a letter from the National Media Commission (NMC) on February 3 following a petition by the Rebecca Foundation.

The petition was in regards to some pronouncements made against the Executive Director of the Foundation, Mr. Ansah on Accra FM on January 11, 2022.

Management of the station said they have since been cooperating with the NMC and Mr. Ansah on the matter.

The Group has thus noted with serious concerns, the involvement of the Police in the matter.

“We, therefore, find it gravely concerning that the Police Service have gotten involved in a matter that was being duly handled by the NMC, the Constitutional body mandated to address concerns of this nature. Indeed, the actions of the Ghana Police Service on this matter and in recent times, regarding journalists and media practitioners in general, leave much to be desired,” the Group stated.

According to the Group, “the emerging trend where the Ghana Police Service are readily unleashed on journalists for discharging their work is a blot on our fledgling democracy and status as a bastion of media freedom in West Africa and Africa as a whole.”

The Group, however, noted that it will cooperate with the Police to ensure resolution of the matter.

Meanwhile, the Police are on a manhunt for three others whom they said together with the Accra FM broadcaster, Kwabena Bobie Ansah, published false news on his ‘Citizen Show’ on January 11, this year.

This was contained in a statement issued by the Police on Friday, February 11.

On Friday, Mr. Ansah’s supporters gathered at the Striking Force section of the Greater Accra Regional Police Command in Accra Central, where he had been detained.

Police say the suspect will be put before court today.

DISCLAIMER: The Views, Comments, Opinions, Contributions and Statements made by Readers and Contributors on this platform do not necessarily represent the views or policy of Multimedia Group Limited.
Tags:
Class Media Group
Kwabena Bobie Ansah
Police
Publication of false news