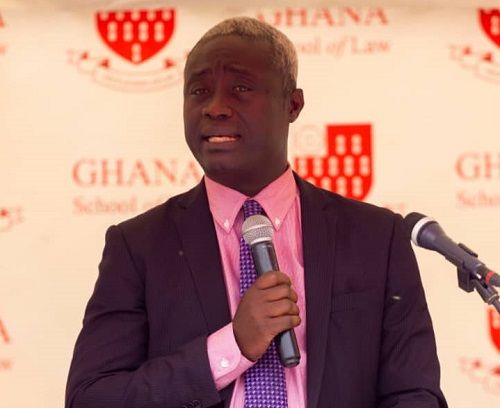 A former Director of the Ghana School of Law says his admission of some 10 students who failed the entrance examination paved the way for the release of an entire building at the Kwame Nkrumah University of Science and Technology (KNUST).

Maxwell Opoku Agyemang says the building now serves as the Kumasi Campus of the Law school.

“Indeed, it should be made known that one offer of admission paved the way for the release of an entire building at KNUST which serves as the Kumasi Campus of the Law School.

“This enabled the School to increase the intake in Kumasi from 50 to over 200 as well as securing places for a library, staff common room, administration facility and a canteen for the students.

“I must stress all the decisions taken in my one year as Acting Director were in the best interest of the School and students,” he stated in a statement to the press.

Mr Agyemang has been indicted by a General Legal Council committee inquiry for admitting 10 students illegally into the Ghana School of Law.

He and two other officials are to face the General Legal Council’s Disciplinary Committee.

Mr Agyemang is currently being considered by the Presidency for appointment as a Court of Appeal judge.

However, there are multiple suits and complaints filed at various quarters seeking to block the appointment even before it materialises.

The former Director of the Law school has been clarifying matters in a statement.

See the full statement below;

My attention has been drawn to various media publications and discussions on my suitability or otherwise to be recommended for an appointment as a Court of Appeal Judge. The basis for these discussions is the alleged unlawful admission of 10 students into the Ghana School of Law. For the records I have not been officially notified or contacted for the said nomination neither has I been served with any court process or copies of multiple petitions circulating on social media.

However, it is of public knowledge that I have been against the said restrictions and has always advocated for the opening of more opportunities for LLB holders to achieve their heart desires. Apart from the restrictive nature of admissions to the School, the Council also operated “a zero-concession admission policy” which meant that no concession whatsoever was extended to the wards of key stakeholders, including members of staff and faculty.

As a matter of fact, this policy was used to deny, not only my ward but wards of other lecturers and staff, admission to the School after obtaining scores ranging from 46 to 49 percent. I considered this policy as unfair especially on my part after 23 years of dedicated service to the School. Upon assumption of office, and considering my long-held views on the admission policy, I submitted two policy proposals for consideration namely, Concessionary Admission Policy and Full Fee-Paying Policy.

The Concession Admission Policy was to offer concessionary admissions to wards of faculty, staff and other key stakeholders without compromising the meritorious admission system. The Full Fee-Paying System was meant to stem the tide of Ghanaian students travelling to other jurisdictions, notably the Gambia to pursue a professional legal education.

It was meant to reduce the cut-off point for those desirable and ready to pay the full cost of the education as it is done in all public universities for their sought after programmes. For instance, in the 2021/2022 academic year, 330 Ghanaians applied to enter the Gambia School of Law paying $100 as application fees.

Out of the number, only 55 were admitted paying almost $10000 as School fees for one year. Apart from saving our compatriots the hassle in travelling to other countries, the policy was also to be used to generate revenue for the expansion of infrastructure to admit more students at the Ghana School of Law.

In the 2020/2021 academic year, I managed to convince the General Legal Council to admit all students who scored 50 per cent and above. This culminated in the admission of 1045 students. The admission of this number of students led to the introduction of the innovative triple track system of classes which created the potential to admit almost 1100 students. In addition to the 1045 students, the school offered concessionary admission to 10 students upon request from key stakeholders who have contributed immensely to the school and the nation as a whole. This brought the total admission to 1055, compared to the 450 admitted in 2018/2019 and the 128 students admitted in 2017/18 academic year.

Admittedly, the offer of the 10 concessionary admissions was made without the approval of the General Legal Council but was not done in secrecy. The issue was brought to the attention of the Chairperson of the Examinations Committee. Other key members of the Council were also aware due to discussions on the issue prior to the admissions. These admissions were offered without any ill-motive or for any personal gain but in the interest of the Gnana School of Law.

Indeed, it should be made known that one offer of admission paved the way for the release of an entire building at KNUST which serves as the Kumasi Campus of the Law School. This enabled the School to increase the intake in Kumasi from 50 to over 200 as well as securing places for a library, staff common room, administration facility and a canteen for the students. I must stress all the decisions taken in my one year as Acting Director were in the best interest of the School and students.

In fact, in addition to the admission of the 1055 students, I was also instrumental in securing the approval of the Council to introduce a Transitional Law Course Programme which paved the way for over 274 students to be allowed to re-enter the School to finish their one-year programme. These were students who were caught by the reversal of professional law to two years without any transition period for repeating students.

The New Transitional Law Programme enabled the affected students to continue with the one-year programme for three years after which they would be withdrawn. All these were done to offer opportunities to enter the Ghana School of Law. This has been my avowed aim for the over 23 years that I have served the school.

The General Legal Council on or about July 2021 established a 3-member committee to investigate allegations of admission of non-LLB holders to the Ghana School of Law; admission of students who did not write the entrance examinations; the payment of monies for admission to the Law School and other issues. The Committee found all the reportage as false except the admission of the 10 students on concessionary basis.

The students have been duly withdrawn. Further, the Council has set up a three-member Disciplinary Committee to conduct disciplinary hearings against myself, the Registrar and the Deputy Registrar of the school on charges of insubordination and acting improperly in our office contrary to the provisions of the Public Service Policy and Framework Manual for Public Servants. The Disciplinary Committee is yet to commence its proceedings let alone pronounce any sanctions.

As stated earlier, I have served the Ghana School of Law for over 23 years. My passion and commitment to legal education is known by all, especially thousands of students who have passed through my hands. In all my public life I have stood firmly on principles I believe in to the displeasure of some segments of society, which to me is normal. I must emphasize that in all my dealings in public no one can accuse me of corrupt act or rendering services for unlawful gain.

As the Acting Director of the Ghana School of Law, I performed my task diligently and sought at all times to change the face of professional legal education. As already indicated, the admission of 10 additional students on a concessionary basis to the 1045 students admitted for the 2020/2021 academic year was not done for any personal or pecuniary gain.

There were no underhand dealings, as all the requests for admissions were considered officially. I must stress and without sounding boastful that I performed very creditably in just one year as an Acting Director. Short as the period may seem, I was able to facilitate the following projects at the school:

Much as I do not begrudge anyone who feels offended by my decision to introduce a concessionary admission policy at the Ghana School of Law, leading to the admission of 10 students without approval of the General Legal Council, it is my wish that the issue be considered dispassionately and in consideration of the service I have rendered to the Ghana School of Law. Rather than sounding repetitive, I still hold the view that denying admissions on some concessionary basis to key stakeholders of the school, such as faculty, staff and others who have contributed immensely to the School is unfair.

It is my hope that the General Legal Council and the public at large will ponder over whether it is fair for a ward of a member of faculty or staff to be denied admission to the Ghana School of Law for obtaining between 47% and 49% in an entrance examination. As I have done consistently, save as I admitted the 10 students in addition to the 1045 students for the 2020/2021 academic year without the approval of the General Legal Council, for which I apologized to the Council, same was not done for any personal or pecuniary interest but in the best interest of the School.