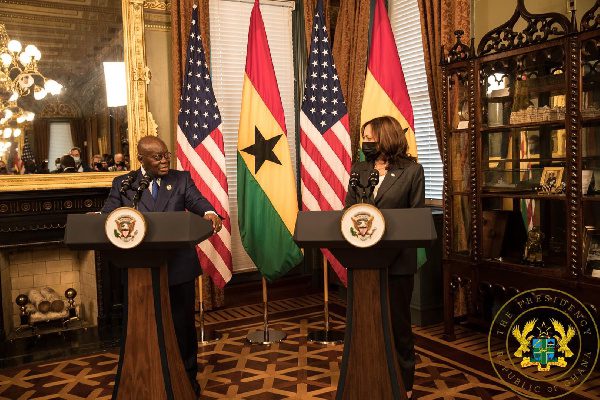 President Akufo-Addo is courting the support of the United States of America to deal with jihadist groups from Iraq and other war-torn countries operating in the West African sub-region.

President Akufo-Addo says countries in the subregion, including Ghana, need America’s intelligence support to track down the terrorists.

He said this when he held bilateral talks with US Vice President Kamala Harris at the White House.

President Akufo-Addo explained that this support should not take the form of US military deployment into the sub-region but rather assistance from the US to enable Ghanaian forces to track down such persons.

“Many of those who are leading the Jihadists insurrection in West Africa are the people who came from Iraq after they were driven out from Iraq. So I think there is some information here that can assist us”.

Earlier this month, Ghana’s National Security ordered the closure of an Islamic learning centre (madrasah) at Nambagla in the Savelugu Municipality of the Northern Region.

This came in the wake of a school raid by operatives leading to the arrest of 33 suspects, including the founder and spiritual head of the centre.

Sources at the National Security confirmed to JoyNews that the operation followed months of security surveillance on the founder’s activities, who is being accused of having direct links with suspected Islamist militants in Northern Nigeria and the Sahel.