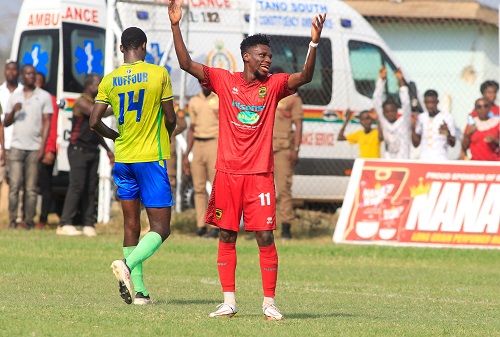 Bechem United have condemned the unsporting behaviour of Samuel Osei Kuffour in their league game against Asante Kotoko on Tuesday, March 8.

The Hunters hosted the Porcupine Warriors in a matchday 19 fixture in the Ghana Premier League at the Nana Fosu Gyeabour Park in Bechem, with the game ending in a goalless draw.

The defender left his foot on the shoulder of Kotoko forward, Franck Mbella Etouga, in the 22nd minute after clearing a ball from his half to prevent the opposition’s attack.

The defender went unpunished for his action with the incident happening at the blind eye of the referee in charge of the game but the video of the action has circulated on social media with the majority seeking a stern punishment for the Kuffour.

However, his club has come out with a statement to condemn the action of the player and apologise to the Kumasi-based side and the entire football fraternity.

“We wholeheartedly apologise to Asante Kotoko SC player Frank Thierry Mbella Etouga and the entire football fraternity for the unsporting behaviour exhibited by our young defender Samuel Osei Kuffour during the first half of the match day 19 fixture between Bechem United FC and Kumasi Asante Kotoko SC,” the press statement read.

“We would like to reiterate that though Kuffour has been one of the most disciplined players in camp, the management of Bechem United have taken disciplinary measures against him to serve as a deterrent to the entire team.

“Discipline is our hallmark of which every member of the club is expected to be a good ambassador of the club.

“We plead with all and sundry to forgive Kuffour,” the press statement ended.

Kuffour also revealed there was no deliberate intention behind his tackle on the Cameroonian forward while adding he has apologized for his action.

“I have spoken and apologized to Frank Mbella [Asante Kotoko] on the Phone on his way back to Kumasi,” the defender said after the game.

“I am very remorseful of the incident that transpired during our home encounter against Kotoko at Bechem Park. I want to articulate my apology to the Cameroonian attacker, Mbella and Kumasi Asante Kotoko.

“I want to fill everyone in that the tackle wasn’t a deliberate attempt to blight the career of the prolific striker. I am very sorry!” he added.

The Disciplinary Committee of the Ghana Football Association is however expected to hand the central defender a punishment.