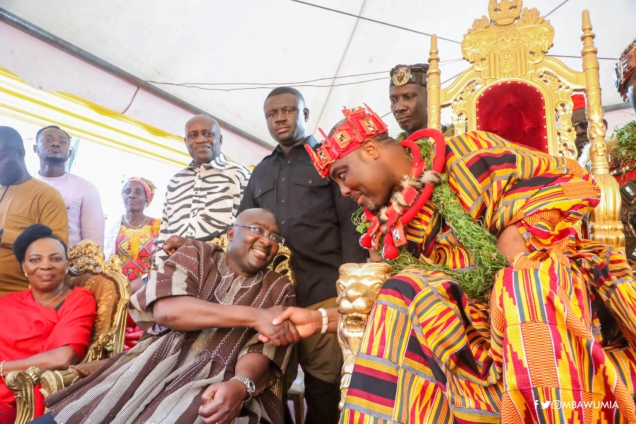 Vice President Dr. Mahamudu Bawumia has declared support for sustainable development and a united Ga state on the occasion of this year’s Homowo festival celebration.

Dr. Bawumia who was received by enthusiastic celebrants at the palace of the Sempe chief, went round to pay homage to some key traditional leaders in Accra who were celebrating the festival before making it to the palace of the cradle of the Ga people.

The occasion was also graced by the National Chief Imam, Sheikh Usman Nuhu Sharubutu, members of the diplomatic Corp, and the former president John Dramani Mahama who left at the time the Vice President walked into the palace.

In a brief remark to the Sempe chief and his people, Dr. Bawumia said “it is a beautiful festival and our Chiefs are the custodians of our tradition and this is why on behalf of the government and our party I’m here to pay homage to all the key chiefs in the Ga state.”

He also encouraged the traditional leadership headed by the Sempe Mantse to keep up with the good initiatives being undertaken in the area, with a pledge to be a partner in that regard.

He gave meaning to that pledge by donating GHS 50,000 to support the construction of the Sempe chief’s palace, and beverages to support the festivities.

The Homowo festival which has, in recent years been marred by clashes, passed peacefully at Jamestown and many other parts of the national capital where it was being held.

The traditional priest of Sempe who offered a traditional prayer, had a rather interesting prayer to the gods to make Dr. Bawumia the next president when president Akufo Addo ends his tenure in 2024.

A similar prayer was said for former President John Mahama about five minutes ahead of the Vice President’s arrival at the venue.