We will not shield any cocoa farmer found guilty of child labour – Deputy COCOBOD CEO - MyJoyOnline.com 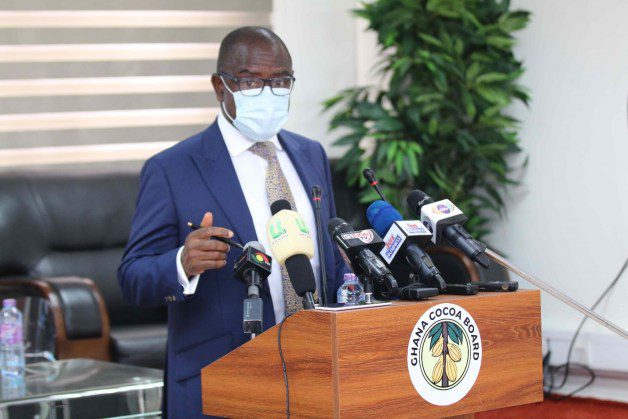 Deputy Chief Executive Officer of COCOBOD, Dr. Emmanuel Opoku has said that his outfit will not protect any cocoa farmer found guilty of child labour.

Dr. Opoku said this while reacting to a latest JoyNews’ investigative report. The investigation reveals how children are trafficked for a sum of GH¢1,000 to work on cocoa farms at Elluokrom in the Western North Region.

Speaking in an interview on The Pulse on Thursday, Dr. Emmanuel Opoku commended JoyNews for the investigative piece.

He said this practice by cocoa farmers is criminal, thus COCOBOD will not shield anyone found guilty.

“We will not shield any farmer doing that, because it is criminal. We will parade them [guilty farmers] on radio and television for the rest of the world and farmers to see that we have done enough and if you are the farmer and you decide not to apply the law, then the law catches up with and you must be dealt with accordingly,” he explained.

Dr. Emmanuel Opoku noted that the unscrupulous actions of some cocoa farmers cannot be allowed to dent the image of COCOBOD.

“I still want us to take the right action that will help make our collaborators or the people we are working with that’s the government of the US, the EU to know that it has come to our attention and we are taking the right measures,” he said.

He appealed to JoyNews to collaborate with the Police and COCOBOD to arrest and prosecute farmers who would be found guilty.

The Deputy CEO said COCOBOD is willing to collaborate with the Child Labour Unit of the Ghana Police Service to redeem child victims from the insensitive act by some farmers.

“I feel so hurt and touched because of this particular act. I am so much interested to work with Joy FM so that we can arrest the people involved and let’s bring them to book,” Dr. Opoku added.

The latest hotline documentary titled, ‘Children in Cocoa Labour’ will air on Monday, January 10, at 8:30am on the Super Morning Show and 8:30pm on the JoyNews channel.