Weinstein ‘a titan and a rapist’, trial hears

Opening arguments have begun in the trial in New York of ex-movie mogul, Harvey Weinstein, who could face life behind bars if convicted.

Prosecutor Meghan Hast said: “The man seated right there was not just a titan in Hollywood, he was a rapist.”

The defence will argue the two encounters, which happened in 2006 and 2013, were consensual.

A Weinstein lawyer said that his opening argument would tell jurors the accusers had sent “loving emails” and “bragged” about their sexual relationships with him.

The trial is expected to conclude in early March. 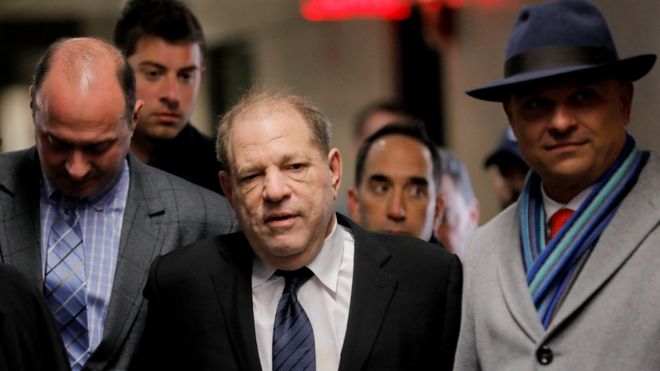 The 67-year-old denies five charges, including rape and sexual assault

Mr Weinstein arrived at the Manhattan court flanked by several members of his team. When asked by a reporter if he could get a fair trial, he replied: “Of course.”

Once one of Hollywood’s most decorated and lauded producers, Mr Weinstein has been accused of sexual misconduct by more than 80 women – allegations which helped drive the #MeToo movement.

But few of the complaints have led to criminal charges.

Last week, a judge told potential jurors that they must decide Mr Weinstein’s case based on the evidence and not make it “a referendum on the #MeToo movement”.

What is he charged with?

Mr Weinstein is charged with raping one woman in a hotel room in Manhattan in 2013, and performing a forcible sex act on a second woman in 2006. 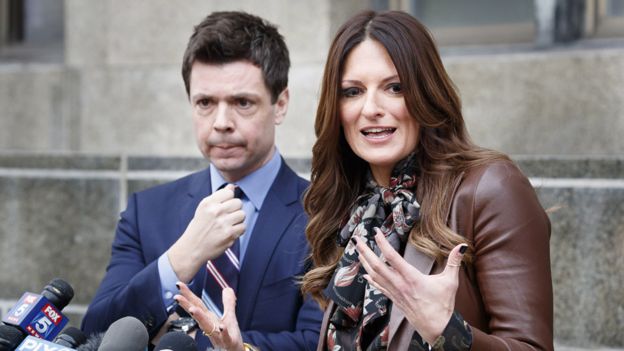 The criminal charges stem back to May 2018, when Mr Weinstein turned himself into New York police. He was then charged with rape and several other counts of sexual abuse against the two women.

He was released on $1m (£760,000) bail the following month and pleaded not guilty to rape and sexual assault in the New York Supreme Court.

There were originally six charges, but in October that year, a New York judge dismissed one of them after prosecutors said one of his accusers had given a witness a different account of the alleged sex assault from the version she had given them.

In August 2019, Mr Weinstein pleaded not guilty to two additional charges of predatory sexual assault. They related to an alleged assault that took place on actress Annabella Sciorra in Manhattan in the early 1990s.

That is too long ago to be prosecuted under New York state law, but prosecutors filed the indictment because it will allow them to call Ms Sciorra as a witness during the trial.

Joan Illuzzi-Orbon, who led the sexual assault case against former IMF leader Dominique Strauss-Kahn in 2011, will lead the prosecution.

Mr Weinstein unsuccessfully tried to get the trial moved out of New York City, arguing that the intense media scrutiny would make it hard for him to get a fair hearing.

What is his defence?

The 67-year-old has admitted that he has “caused a lot of pain”, but maintains he is innocent of any crimes.

“Mr Weinstein believes that all of these relationships were consensual,” his spokeswoman said soon after the first allegations emerged.

His lawyer Donna Rotunno has said she plans an aggressive defence.

In September, she told CBS: “Any time we talk about men and women in sexual circumstances, I think we have to look at the fact that there’s always an area of grey. So there are these blurred lines, and I think sometimes one side walks away from an event feeling different from the other.”

She said the evidence would exonerate the movie mogul of any criminal wrongdoing. “I’m not here to say he was not guilty of committing sins,” she said. “But there’s a difference between sins and crimes, and I don’t think he’s a rapist.”

Mr Weinstein himself is unlikely to testify.