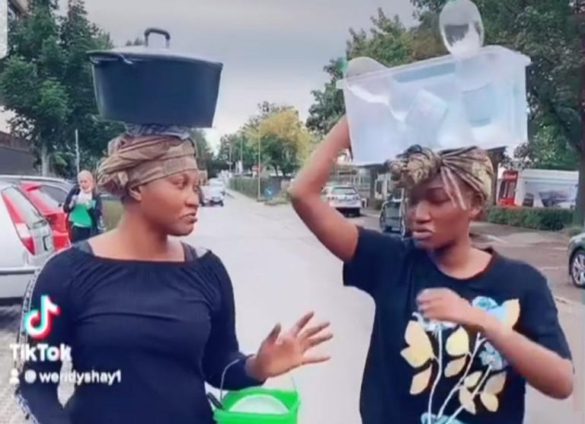 Musician Wendy Shay has taken her hustle from the studios to the street as she sells ‘pure water’.

As seen in a video posted to Instagram, ‘the Emergency’ singer was in the company of her mother, Obaapa Kaakyire Addo who was also hawking food.

The duo’s new act was to promote Shay’s latest single, ‘Heat’, a song that portrays the daily struggles of the ordinary Ghanaian.

Participating in the trend, they discussed their hustle while borrowing words from the song which has since garnered half a million views on Youtube.

In another instance, they were seen standing by some garbage bins singing along to Shay’s song.

Wendy Shay released ‘Heat’ in September, 2021. Following the release,  a section of the public have credited the CEO of RuffTown Music, Bullet, as the songwriter of “Heat”, judging from the lyrics

But reacting to these speculations, Wendy Shay, expressed disappointment in people who are always quick to credit her hard work to a “so-called songwriter.”

According to the “Uber driver” hitmaker, there are a host of top artistes who employ the services of songwriters, however, they are not criticised as much as she is.

“Almost every female artiste in Ghana has a songwriter but nobody really cares who writes for them. But anytime Wendy Shay drops a hit song, they want to credit everything to the so-called songwriter Ghana wake up I” she wrote in a tweet dated, September 20.