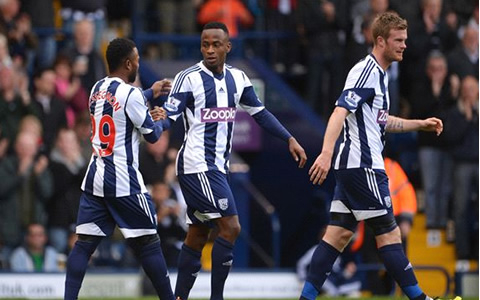 Pepe Mel's men headed into the game knowing a win would ease any lingering fears of relegation, and Berahino's goal proved the winner in a tight clash with Sam Allardyce's men.

Head coach Mel opted to hand Berahino a first start in attack since February and was rewarded when the England Under-21 international struck in the 11th minute, settling Albion's early nerves.

Andy Carroll went close for West Ham either side of the early strike and almost made West Brom pay for missed chances after the interval when he rattled the crossbar from a 71st-minute corner.

However, the hosts held on to pick up a valuable three points and move five clear of the relegation zone.

West Ham are a point better off and all but safe despite a fourth consecutive loss.

Carroll kept the ball alive well from a sixth-minute corner to draw a sharp near-post save from Ben Foster and Jonas Olsson followed his goalkeeper's heroics by producing a last-ditch challenge to deny the West Ham centre-forward.

It was a start in keeping with the sloppy opening that saw West Brom 2-0 down after 10 minutes at Manchester City in midweek, but they then stunned West Ham with a goal from their first attack.

Stephane Sessegnon drove forward to release Morgan Amalfitano into the area and he drilled across goal for Berahino to apply the finish.

The impact on West Brom's overall performance was initially negligible and Foster had to be at his best once more to deny Carroll, who got across Steven Reid to head Mohamed Diame's inviting cross goalwards.

Reid's fellow full-back Billy Jones was inches away from doubling the hosts' advantage with a flying header from Amalfitano's whipped 25th-minute delivery.

Both teams lost a defender apiece to injury before half-time as James Tomkins and Reid departed, while the frenetic pace showed no sign of letting up.

Sessegnon continued to be influential and blasted over having twisted and turned past Mark Noble seven minutes after the restart.

West Ham goalkeeper Adrian was then down sharply to keep a Jones strike out at his near post and Dorrans, searching for the composure that helped him net spectacularly at the Etihad Stadium on Monday, was off target again in the 56th minute.

Immediately after Berahino's touch had deserted him in the 62nd minute, Sessegnon teed up his fellow forward to fire straight at Adrian from close range and pass up a glorious opportunity.

Berahino's predatory instincts were then lacking as he failed to turn home Youssuf Mulumbu's speculative effort.

Carroll almost made him pay when he was inexplicably left alone to strike the bar from Matt Jarvis' delivery, while Sessegnon scuffed a 75th-minute volley and Adrian denied him the goal his efforts deserved.

Instead, it was Berahino, very much the villain when his error enabled fellow strugglers Cardiff City to leave The Hawthorns with a 3-3 draw last month, who was the hero for West Brom.