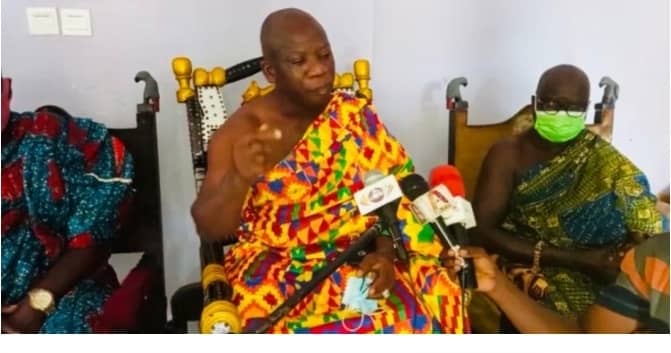 Chiefs within the Eastern Nzema Traditional Council have denied supporting any politician to be nominated as the District Chief Executive (DCE) for Ellembele in the Western Region.

At a press briefing at Atuabo, the Paramount Chief of the Eastern Nzema Traditional Council, Awulae Amihere Panyile, said a group of chiefs who earlier addressed the media and declared their support for Kwasi Bonzo to be retained as the Ellembele DCE, does not mean they represent or speak for the paramountcy but were only satisfying their parochial interest.

“This is Ellembelle District within the Eastern Nzema Traditional Council, and as the ranking host, if there is any decision to be made, it has to come to the Council for us to decide where we stand and that goes for everybody. I returned from a trip yesterday [Saturday], only to find out what has happened behind me.

“I questioned some of the Chiefs who told me they were not a party to what happened; meaning that there is a group of rogue individuals who have gone out to promote their own interest, and it happened that they are promoting the interest of the current DCE (Kwasi Bonzo to be retained).”

“I don’t think this is the time for it; and I want to assure anybody or politician who has the interest to compete for the Ellembele DCE position that, the Eastern Nzema Traditional Council will not betray the interest of anyone as long he or she seeks the interest of the Nzema people”, he added.

The Paramount Chief however warned chiefs against openly engaging in politics in support of one candidate, and cautioned them not to interfere with the vetting committee’s work.

“It is within the prerogative of the chiefs to support anyone, but if they choose to come together as a group, then it sounds like it is the Eastern Nzema Traditional Council that is doing this and that is not true.

“I want the world to know that it is not the work of the traditional council even though there are some Chiefs and Queen mothers who gathered to make this press statement. This is not our preference, and it is not our mission to truncate the vetting processes.”

“Even if we choose one person, it has to be a decision made under the traditional council by all the chiefs, at least the majority. I’m sad, and I don’t want the world to feel that Eastern Nzema or the Chiefs of Ellembelle want to elect a DCE. We have to be careful as Chiefs. We can do some politics, but not this open politics. We can give advice or suggestions, but we can’t be seen doing these open politics”, he added.

In a related event, a group calling itself Communicators and Serial Callers Association of Ellembelle NPP, has questioned the political interest of the press conference by some chiefs in Ellembelle, who called on the President to retain the Ellembele DCE, Kwasi Bonzo.

The spokesperson of the group, Paul Attabiah-Nyanzu, while addressing a press conference at Anyinase described some of the Chiefs as NDC and NPP loyalists to Kwasi Bonzoh.

“The Chief of Akoto whose residence the press conference was organized is indeed an NPP member and a government appointee at the Ellembelle District Assembly, whose appointment was facilitated by the out-going DCE.

“The Chief of Asanda is more or less a special aide to the DCE, and he’s often seen in front of the DCE’s official car. He is affectionately called deputy DCE. We are not surprised because, as typical black Africans, they want to protect their purse and relationships. The most annoying is the chief of Ampain.”

“This Chief has been a polling agent for NDC for years; he is currently in charge of the ‘Food Bank’, an initiative by the NDC Member of Parliament for Ellembelle. He doubles as the NDC’s ‘Chiefs Caucus’, branch chairman in the Ellembelle constituency…Nana Nyameke Fofole on many occasions served as an NDC serial caller, often calls to praise the NDC on West End radio. He is a beneficiary of the NPP internal wrangling, and on several occasions called to attack the NPP Constituency Secretary and the National Chairman on West End radio.“, he said.

Although the position of the Chief Executive for Metropolitan, Municipal, and District Assembly is not necessarily a political party position, the Serial Callers further described the Chief of Salma and the remaining as non-NPP’s who cannot speak for the party.

“The Queenmother of Edwakpole and A. B Bokazo, Obahema Assuaba, who was seen in a viral video during the press briefing, are all NDC Queens who signed nomination forms for the NDC Member of Parliament, Emmanuel Arma Kofi Buah, and followed him for submission at the NDC party office during the 2020 elections. Obahema Ama Tanoe of Azuleluanu is also a leading member of the NDC women’s wing. She is a cook for the NDC during their political activities.”

“It is upon this that the serial callers Association of Ellembelle is urging its members and other party supporters to remain calm as the President in his wisdom will select a DCE for Ellembelle based on the candidates’ performances and capabilities they exhibited at Jubilee House”, he added.

DISCLAIMER: The Views, Comments, Opinions, Contributions and Statements made by Readers and Contributors on this platform do not necessarily represent the views or policy of Multimedia Group Limited.
Tags:
DCE
Eastern Nzema Traditional Council
Ellembelle
Western Region