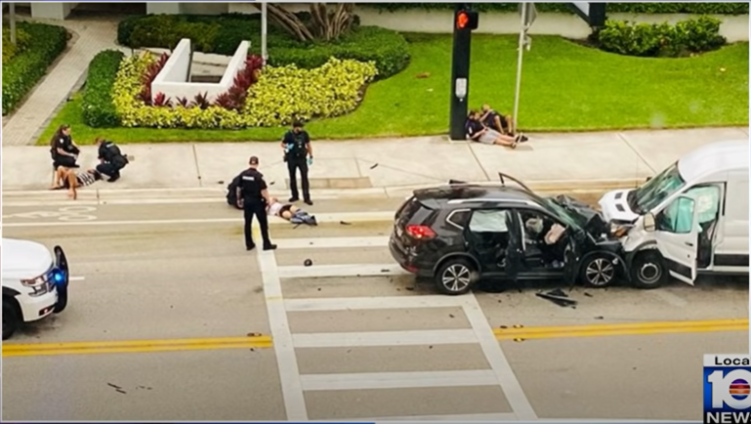 A Florida driver distracted by receiving intimate services from his passenger lost track of his surroundings and crashed head-on (it only gets worse from here, folks) into a FedEx delivery vehicle in Ft. Lauderdale on Thursday, resulting in “injuries to his private area,” WPLG Local 10 reports.

The man and woman were northbound in an SUV on North Ocean Boulevard when the driver apparently became distracted by his passenger’s performance and crossed the center line, striking the delivery van as it traveled southbound near the intersection with Northwest 19th St.

Neither occupant of the FedEx vehicle was injured; the only package harmed was the one being attentively gift-wrapped by the passenger of the SUV.

Aerial footage of the aftermath showed both SUV occupants being treated at the scene, pants around their ankles.

Other reports indicate that the driver and his passenger were both injured in the collision, which happened while the deed was being done.

Despite suffering perhaps the most predictable consequence in the world, the driver appears to have gotten lucky twice over, and the resulting injuries were not reported to be reproductively catastrophic.

DISCLAIMER: The Views, Comments, Opinions, Contributions and Statements made by Readers and Contributors on this platform do not necessarily represent the views or policy of Multimedia Group Limited.
Tags:
FedEx truck
Florida
Oral Sex
Vehicle crash