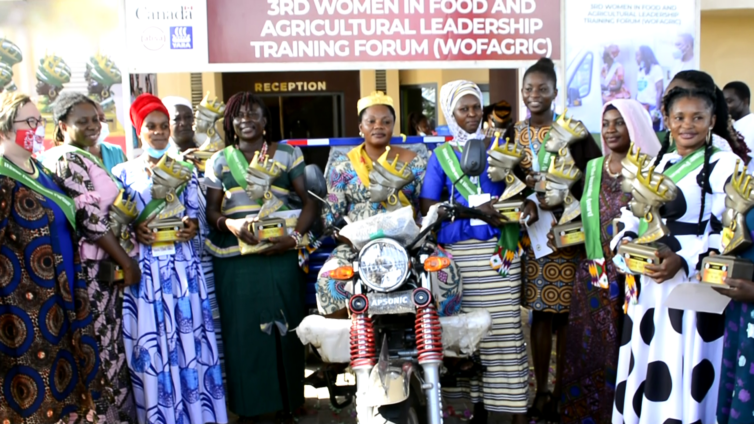 Some women in the Upper East and Upper West regions have been awarded for their work in farming, agribusiness as well as the agriculture value chain.

The awards were given by the Agrihouse Foundation at the 3rd Annual Women in Food and Agriculture Leadership Training Forum.

In all, 15 women were recognised under the awards scheme dubbed; The Gold In The Soil Awards.

The Agrihouse Foundation is a women-led agriculture advocacy organization that seeks to empower women working in various capacities in the agriculture sector.

The Founder and Executive Director of Agrihouse Foundation, Alberta Nana Akyaa Akosa told Joy News the Annual Women in Food and Agriculture Leadership Training Forum and the Gold in the Soil Awards is an interventional project that moves from region to region, to celebrate women and promote the strengthening of women in agriculture.

The previous editions of the program were held in the Volta Region and the Ashanti Region in 2019 and 2020 respectively.

This year, the two-day event held in Bolgatanga opened with a training session where the women were engaged one-on-one with resource persons and also held round table training in various areas of agriculture.

A number of farms belonging to women were also visited where field training were held for the women who participated in the programme.

Alberta Nana Akyaa Akosa said the women farmers would be supported in various ways to help improve their work.

“The fifty farms that we visited; we are looking at supporting as many [of them] as we can with fertilizers, knapsacks, solar pumps and with irrigation systems”, she said.

The second day of the program was dedicated to the Gold in the Soil Awards where 15 women were awarded for their various achievements in farming, agribusiness and the agriculture value chain.

According to Alberta Nana Akyaa Akosa, 131 entries competing for the awards were received.

The entries were then shortlisted to 50, made up 25 entries each from the Upper East and Upper West regions.

She said the farms belonging to the 50 shortlisted applicants were visited to enable organizers and partners determine what kind of support they needed and also to recognise them for their efforts.

“It is interesting and exciting to know that within this challenge that we are in; where we are focusing on rain – fed systems, these women still have the passion and the faith to till their lands”, Akosa said.

The rest were; the She-Operates Award, Outstanding Woman in Extension Services Award, The Super Woman Farmer Award, Star Woman Agripreneur Award, Royal Agro Award, Diamond in the Rouge Award, Feed to Food Award, Passion for the Farm Award and the Gold in the Soil Award which was the biggest of the night.

Portia Asumda, a woman from the Bawku West District of the Upper East Region received the Gold in the Soil Award, emerging as the ultimate winner.

Madam Asumda received a certificate, a plaque, farm inputs, and a tricycle for her excellence in combining crop farming with the rearing of guinea fowls, ruminants and shea butter export.

She used the occasion to appeal to the government and other stakeholders to assist women farmers with machinery to increase their productivity.

“It is not easy because we always hire a tractor [to plough the farms] which costs us a lot. For every 1 acre, we pay GHC 150 and as I speak, we have up to 25 acres of land that we farm on so mostly, all the money we get ends up being used to pay for transportation and the tractors we go in for”, she said.

“I think if they can help us get a tractor and a motorking [tricycle], it will help us. So that we can also help the other women in community”, Portia Asumda added.

DISCLAIMER: The Views, Comments, Opinions, Contributions and Statements made by Readers and Contributors on this platform do not necessarily represent the views or policy of Multimedia Group Limited.
Tags:
3rd edition of WOFAGRIC and Gold in the Soil Awards
Agrihouse Foundation
Food and Agriculture Leadership Training Forum
Gold in the Soil Awards