Works and Housing Minister inspects ongoing works in the sector 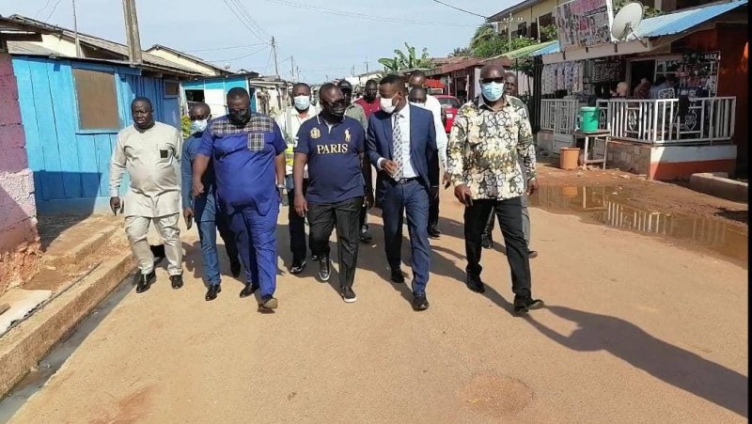 The Minister of Works and Housing, Francis Asenso-Boakye, says protecting the country’s coastline is key in safeguarding lives and property to harness resources for growth.

The country’s coastline did not only have huge tourism potentials but also served as a livelihood to the many fishermen and people in the fish value chain.

The Minister said this during an inspection tour of some sea Defence projects and storm drains currently under construction in the Western Region.

Four sea defence projects, including; those at Nkontompo, Ngyiresia and New Takoradi, have been completed with four ongoing at Aboadze, Axim, Dixcove and Amanful Kuma.

The Minister’s first point of call was the Aboadze Sea Defence project in the Shama District in the Western Region.

The project, covered about five kilometres of the coastal stretch and started in November 2019 to safeguard and protect critical state assets such as the Aboadze Thermal Plant.

The Project, executed by Xara Developers, a Ghanaian Civil Engineering company would integrate the construction of revetment wall, groynes and breakwater structures to protect the communities along the Aboadze-Abuesi coastline including; beach nourishment and land reclamation.

The Director of the Hydrology Division of the Ministry, Hubert Osei Owusu-Ansah, explained that the project consisted of two sections with one towards the east of Aboadze 30 per cent of work done.

He said Xara Developers had undertaken designs of the breakwater for actual work to begin.

Mr Asenso-Boakye said the Ministry was keen on coastal management and protection.

The country had about 550 kilometres of coastline, however, the rise in sea levels, changes in weather patterns and other increased environmental pressures posed a significant threat to lives, property and economic activities along the coastline.

The Sea Defence would not only boost the resilience of the coastal settlement, but also protect lives and property from tidal wave erosion and rising sea levels.

The Project Manager of Xara Developers, Kojo Yankson, assured that the project would be completed to protect the coastline in the Aboadze-Abuesi enclave.

He said, Xara Developers have secured the sand at the Essipon-end against erosion covering about 210 metres with about 1.2 metres remaining.

The project which was in its first year, started with stockpiling of boulders in 2020 followed by basement ahead of the breakwater works.

Mr Asenso-Boakye later visited the Essikafoabatem number two drainage system, the Amanful Kuma sea Defence, where the chiefs and people called for a landing area to enable them to go about their fishing business.

The Western Regional Minister, Mr Kwabena Okyere Darko- Mensah during a courtesy call on him, urged the Minister to ensure that the Region benefited from affordable housing projects, improved drainage in the Region among others.