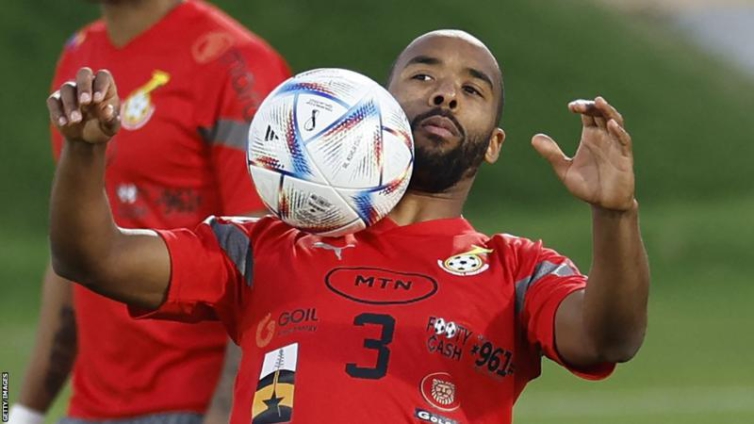 Defender Denis Odoi says Ghana’s struggles earlier this year have helped to bring the squad together as they prepare for Thursday’s opening World Cup Group H match against Portugal.

Ghana, ranked 61st in the world, are the tournament’s lowest-ranked team and that is partly because of their poor showing at the Africa Cup of Nations (Afcon), where the Black Stars failed to win a game and finished bottom of their group.

Since that failure, Coach Otto Addo has recruited from the diaspora and Belgium-born Odoi, who plays for Club Bruges.

The young defender is one of the newcomers who helped the squad qualify for Qatar ahead of fierce West African rivals Nigeria.

“The journey has been positive,” Odoi, 34, told the BBC World Service.

“I think sometimes you have to be deep to grow from that and learn from that. I think that’s what these experiences brought.

“Obviously, Afcon was a very bad performance – one of the worst in the last few years and decades. We managed to grow and learn from that process.”

Addo won only one of his first seven games in charge of Ghana but the side have recorded victories in their past two friendlies against Nicaragua and Switzerland.

“We’ve used this last week to fit everybody in and to get used to the system and practice the defensive and offensive battles,” the former Fulham full-back said.

“And everybody gets to know each other a little bit better on the pitch.”

Despite their low ranking, Odoi believes Ghana is capable of upsetting Portugal, who were European champions in 2016.

“Everyone knows Portugal players are of a high level,” he said.

“We still have to play the game. It is not like Portugal has won this game. I am sure they are aware of that.

“If you look at the performances of other African counties, and Saudi Arabia [against Argentina], you still have to play the game.”

Meanwhile, Brighton & Hove Albion wing-back Tariq Lamptey is among those poised to make his competitive debut for Ghana.

The former England Under-21 international has featured in two friendly matches since switching allegiance in July – a decision his parents supported.

“They always said to me that they’re proud of whoever I represent,” Lamptey, 22, told the BBC’s World Football podcast.

“Ultimately, I was born in England, and they’re from Ghanaian background. Making my debut against Brazil was a really proud moment for both me and my family. It was a surreal feeling against some of the best players in the world.

“It’s every little boy’s dream to play football at the highest level. If I’m selected, then I will try and do my best.”

Lamptey joined Ghana for friendlies against Brazil and Nicaragua in France in September, and says he settled into the squad quickly.

“They were very welcoming and I was just able to get on the training pitch and get to work,” he said,

“Off the pitch, I knew a few of the boys before but it was really good to get to know everyone. It’s a good group.”

The reaction of the Black Stars fans, both on social media and from the stands, has also been important to Lamptey.

“I just want to say a massive thank you to the fans, because their love and support has definitely been received well,” the former Chelsea youngster said.

“I’m really grateful to have great fans like that.”

DISCLAIMER: The Views, Comments, Opinions, Contributions and Statements made by Readers and Contributors on this platform do not necessarily represent the views or policy of Multimedia Group Limited.
Tags:
Black Stars
Denis Odoi
Qatar 2022