Two of the pre-tournament favourites collide in Nizhny Novgorod on Friday evening at 6pm, as Brazil and Belgium clash in their World Cup quarter-final.

Brazil coach Tite has confirmed that Real Madrid full-back Marcelo will return to the side to face the Belgians.

Marcelo was forced off early on in Brazil's final group game as they beat Serbia to assure themselves of top spot in Group E, before the same back problem cost him a place in the team that beat Mexico 2-0.

"I talked to Marcelo and Filipe Luis," said Tite.

"Marcelo left (against Serbia) because of a clinical problem and he has not been back because of a physical problem, he only had 45 to 60 minutes. Filipe Luis played very well in those matches but Marcelo is coming back." 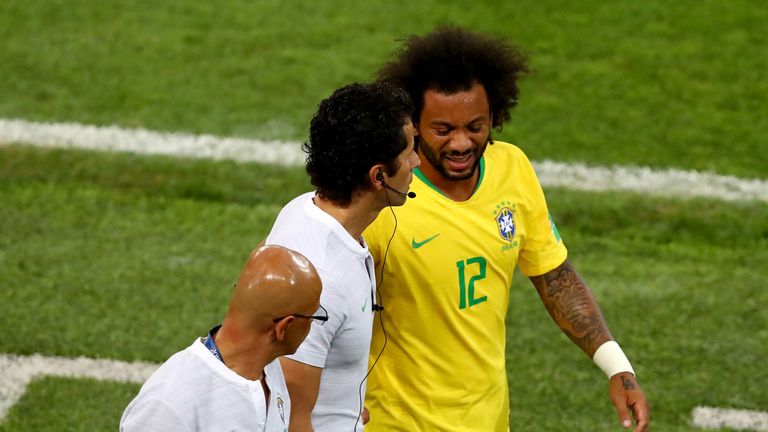 Marcelo limped off during Brazil's win over Serbia

Roberto Martinez believes his Belgium team are ready for the challenge of Brazil and says there is "something special" about his squad.

Martinez feels his side, despite being stacked with individual talent, cannot be regarded as favourites because of their inexperience but he is convinced they can flourish.

Speaking at his pre-match press conference, the former Everton manager said: "The two sides are very similar in terms of qualities. The difference is we haven't won a World Cup – simple as that.

"When you go into a tournament if you don't have that know-how of winning one you can't have an advantage on the opponent.

"We shouldn't play Brazil, we shouldn't be in awe of the opportunity we have. We need to enjoy our game, be ourselves. When we do that our talent shows.

"There is something special in this squad, no doubt about it. The signs are positive and of a real desire to be on the football pitch.

"We can't wait. I feel we are as ready as we can be. Over the last two years we have been working towards this moment."

Along with the return of Marcelo, Fernandinho will also come into the Brazil side.

The Manchester City midfielder has yet to start a game in Russia but will replace Casemiro – who misses out through suspension – and is likely to be joined in the starting XI by club-mate Gabriel Jesus, despite the fact the forward has yet to score in the finals.

Defender Miranda joined Tite at the press conference at the Kazan Arena and the Inter Milan man will captain the side.

Belgium were thankful to goals from substitutes Marouane Fellaini and Nacer Chadli in their comeback win over Japan but Martinez is likely to keep the same team that started the game.