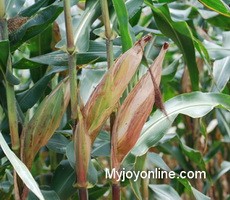 The young man perfected his agricultural practice under the tutelage of his father and today he is proud to be in the business of farming.

“I’ll tell the youth that farming is good business. Someone may have completed university or secondary school but can’t find job; he may be selling polythene bag in Accra without a place to sleep; but if he choose to come to the village to give it a try, things could be better”, he entreated.

Major challenges to farm productivity, according to Samuel, include the uncertainty in weather patterns, non-availability of credit facilities and delays in release of government’s subsidy on fertilizer.

“We would appeal to government to release the fertilizer on time to help in our farming”, he told Luv Fm.

In the Fisheries sector, 46 year old Mohammed Issah from Kodie in the Afigya Kwabre District came tops in the region.

The Regional Farmers’ Day event was commemorated at Nkawie, in the Atwima Nwabiagya District.

He noted that mobilizing farmers through the FBOs to increase access to technology, inputs and market for their produce is key to modernizing agriculture and improving human capacity for increased production.

Dr. Agyemang-Mensah added that the Ministry has outlined various policies for FBOs development including the setting up of FBO’s Secretariat at the MOFA, registration and monitoring of their activities and the establishment of FBO Development Fund.