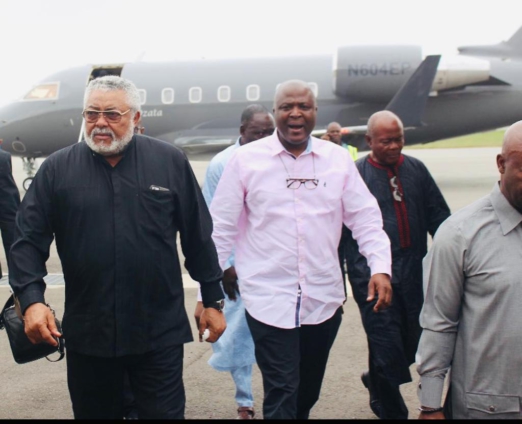 According to Mr. Ibrahim Mahama, the lessons he has garnered from the founder of the NDC will guide him for as long as he lives.

“The principles, knowledge and wisdom you deposited in me will remain and guide me through my lifetime. You will always remain in my thoughts. Till we meet again. Rest In Peace Papa J,” he said.

The C.E.O in his tribute also stated that the relationship that existed between the late former president and himself was like that of a father and son.

“You were a true friend and a father figure in my life. I discussed a lot with you relative to my person in businesses.”

Meanwhile, brother of Ibrahim Mahama, John Dramani Mahama has also eulogised Jerry John Rawlings, commending him for his peaceful and enduring nature coupled with his political astuteness, wit and charisma.

Referring to the late Statesman as “Boss”, Mr. John Mahama confessed that the memory of him (Jerry John Rawlings) will continue to inspire him as well as countless generations of Ghanaians, inciting a spirit in Ghanaians to “challenge the status quo and use their non-conformism to spur societal progress.”

DISCLAIMER: The Views, Comments, Opinions, Contributions and Statements made by Readers and Contributors on this platform do not necessarily represent the views or policy of Multimedia Group Limited.
Tags:
Ibrahim Mahama
Jerry John Rawlings
John Dramani Mahama
JoyNews